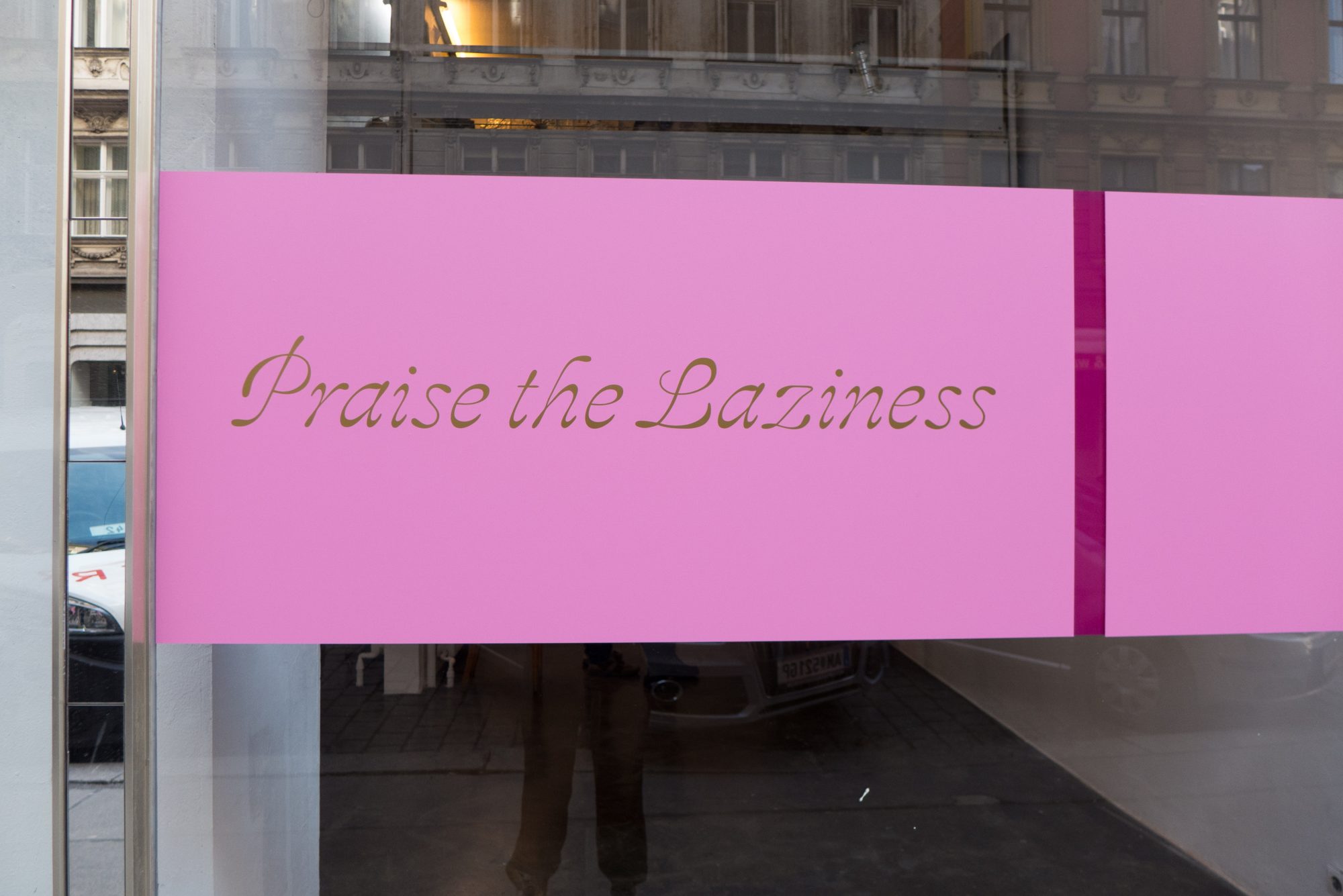 Considering the work of Mladen Stilinović (Artist at work 1973) within the concept of the program and exhibition “ Praise the Laziness “ at the 12-14 Contemporary Gallery, we position the work in perception of understanding the laziness. Laziness as the necessity for the activity of the work. Creative process of thinking and re thinking ideas witch can contribute with progressive results or even opposite, does not necessary should or must include physical activity. The crucial moments in creation of the artistic work comes from the mental sphere and appears within the process of thinking. When it seams that person is not active, actually it is very opposite of that. We call esteemed audience to get involved in the happening of doing “ nothing “, The process of doing it – or not doing it, we will try to grasp and capture nothingness within the certain period of time. Mandarina Brausewetter’s approach lies in omitting the wings. The remaining drive springs condemn the artist to inaction. She equates the wings with the Muse, whose influence is important as the basis of the creative act. No muse without art, no wing no winged artist.
The interpretation of whether the wings were forgotten out of laziness or directly out of a denial attitude is left to the recipient.
The dragonfly was deliberately chosen by Mandarina Brausewetter, on the one hand because of the diverse meanings in different cultures, on the other hand because of their busy locomotive nature, as a counterpoint to the conventional connotation of laziness.
The dragonflies have a number of popular names, which can be traced back to their use in mythology and folk beliefs. Thus, the dragonflies in the Germanic mythology of the goddess Freya or Frigg were assigned and holy. In the two oldest chronicles of Japan, Kojiki and Nihongi, the Japanese creation myth of the island kingdom, the largest island Honshu is as Ō-yamato-toyo-aki-zu-shima (Kojiki: 大 倭 豊 秋 津, Nihongi: 大 日本 豊 秋 津 洲, dt “Great Yamato Fertile Dragonfly Island”). The name is said to go back to the first Tennō, Jimmu, who compared the shape of Japan (“Grand Yamato”) with a dragonfly drinking with her tail. The dragonfly was thus a symbol of imperial power in early Japan. The dragonfly is also regularly found in literature, as in Heinrich Heine’s poem The Dragonfly. In the era of Art Deco, many artists took up the dragonfly and its fragile yet robust structure.
Especially in modern cartoon series to various Japanese mangas, the dragonfly is used because of their flying skills as an aircraft, in other it represents the design for futuristic-looking spaceships in dragonfly form. Noteworthy is the multi-minute opening credits of the Hollywood sci-fi comedy Men in Black, designed entirely from the perspective of a hunting dragonfly.
The dragonfly as a technical marvel, as a means of transport.
But without wings, the dragonfly is motionless, consecrated to death. The remaining wings are like left overs from a colorful past. The bathrobe as a meeting space for ideas of coziness, depression, illness, age, leisure and leisure time, lasciviousness and luxury. Beliefs are the foundation of our life, the land on which we live. What we do and experience every day, is our real religion, and shows what we truly value in life. Mythological Architecture is created from the open structures of modern spirituality. It serves as the fabulator of the new faith with the goal to find the modern myths.