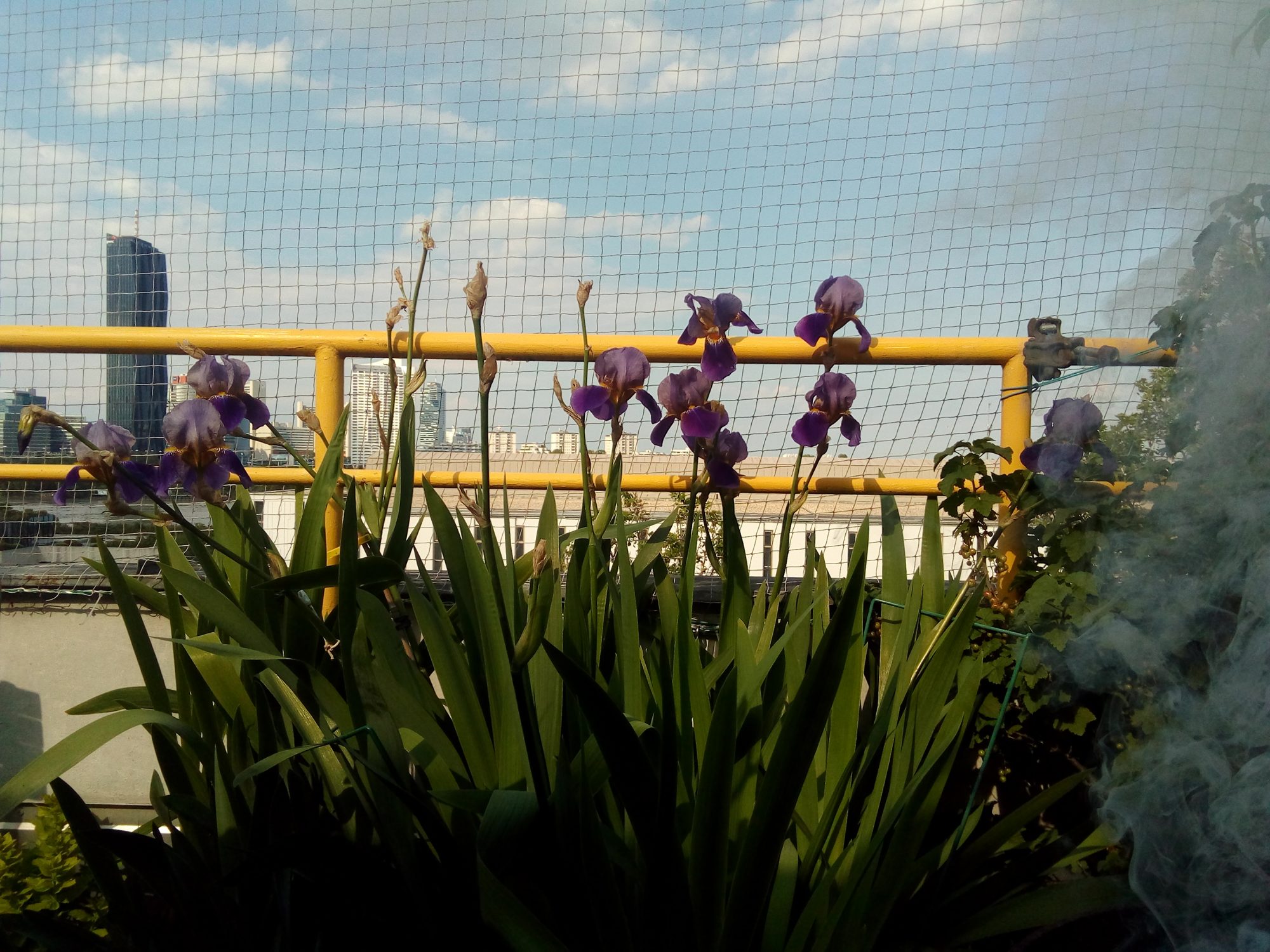 PICTURES of the EXHIBITION Ausländer came out much more as model of social activity among people with same or similar understanding regarding society and music as tool of communication, than usual musician band format.
With introduction manifest statement that you can hear on their concerts;

They position them selves towards present political circumstances that we are confronting today.
As we all know Ausländer (a ger-stranger, a sojourner) is a term used as a deceitful and vulgar term for a person who is not desirable and does not belong to a particular country or nation in which she or he is residing.
According to such connotations this international band gathered up with people from all around the world, who speaks several different languages, with different colors of their skin and different colors of their eyes, stand together and confront such hate speech by supporting humanistic values of mutualism, understanding, and equality among people.
The group functions on the basis of the collective which Is open for collaborations with other people and bands.
Ausländer are recognized on the alternative scene as unusual music, which follows in high-energized punk, electro, noise, drone, and experimental genre with abstract vocals and dark appearance.On the stage you can see not only live and loud concert but also intense visual experience with performances by obscure characters rising from the depts of the underground. Laziness is that force that pulls me back to my bed, to my sofa, to the shadow in wich I can hide that I am actually afraid of making things wrong.
One stays there and say to everybody and to oneself that one does not need to start now because anyway everything is already ready in ones head… One “just” needs to stand up and do it.
In the back of ones head, however, there is a cold and itching monster telling very quietly that one cannot do it right. So one stays there, frozen.
One is not lazy to start. One is frighten to fight. Sharing an intimate moment. When I separate myself from the rest of the world to go deeper into my thoughts, into feelings. Honest feelings regarding all life in the universe. Sleeping with the provoking energy that gives life, Energía dadora de vida as it is called upon in the Temazcal ritual. My skin in direct contact with water and heat, later on with roots. Roots that may feed from me and I from them.

In sleep in a deep moment of being alone, inside our body. Where we don’t hide any behaviour, but what comes natural to the body. Where we dream our terrors and our wishes. Where “reality” can change and symbols fill the atmosphere. What better place to become one with new seedlings. What can the energy of a newborn plant that is growing skin to skin with us, teach us? What can we give to this new being?  Might I feel the energy of life; waking up together with the sun and sleeping with the moon. Breathing together, exchanging feelings and perhaps thoughts.

What happens if we become life support? Would this enable us, me, in this interactive experiment/performance, to have new connections that generate a greater understanding and deeper empathy? MOHNMANIE is a collaborative project with the austrian artist Manuela Picallo Gil that refers to an economy in which revenue has replaced ethical principles. Cueto and Picallo Gil question if following unethical procedures in order to reach that economical benefit is valid. This collaborative project does not question the nature of the poppy or the mass media, but an economic system that allows and encourages polarization, social hierarchies and unequal working conditions to keep a clear division between those who produce and consume the good and those who accumulate the profits.

“Laziness is the absence of movement and thought, dumb time – total amnesia. It is also indifference, staring at nothing, non-activity, impotence. It is sheer stupidity, a time of pain, futile concentration. Those virtues of laziness are important factors in art. Knowing about laziness is not enough, it must be practiced and perfected.” – Mladen Stilinović

In that sense we experimented with the concept of laziness and called the esteemed audience of the exhibition opening “Praise the Laziness” at 12-14 contemporary to get involved in the happening of doing “nothing”. The process of doing it – or not doing it – we captured on one roll of Super8 film, which has a duration of three minutes. “Fishing” is a durational performance in which I sit and fish canned fish in aquarium.

Out of the Black Hole
HUBERT HASLER´s Bauchnabelfussel  & Overrun Projekte The highest expression of relaxation, also commonly referred to as laziness, is for me to let the view into the distance relax, picking ones nose, ….
Hubert Hasler decided on the black hole in the landscape of human bodies in which much disappears or can be found: the belly button.
The belly button represents the capped connection to the former nursing mother. A leftover, a scar.
Belly fuzz consist of small pieces of fiber in our clothing, dead skin cells, fancy body hair that collects in the indentation of the navel. They are mostly gray, suggesting people’s preference for dark clothing. This and other findings come from a study carried out by Karl Kruszelnicki in 2001 at the University of Sydney, Australia, to systematically study the characteristics of navel lint. Belly lobes move up, out of underpants, and not as previously thought, from top, undershirt, down.

Women have less navel lint because their body hair is thinner and shorter.
Perth’s Graham Parker, a predecessor of Hasler, is a record holder in collecting navel lintels in the Guinness Book of Records. He has been collecting since 1/17/1984 and is taking almost 3.03 mg out of his navel every day. In contrast to Kruszelnicki’s realization, his lint is reddish, although he hardly wears red garments.
The TU-radiation physicist Georg Steinhauser found out in a three-year “research project” the last secrets hidden between the abdominal folds. The solution for the selective accumulation of dead matter are the belly hairs growing in concentric circles around the navel. This is also the most obvious reason why significantly more men are umbilicals than women. The flaky structure of the hair tears the undershirt (against Kruszelnicki’s theory) first the textile fibers. The scales of the hair act as barbs and guide the fibers towards the center, where they condense into felt-like balls.
Navel lint seems to us to be an archaic bond to our inner being, which in the act of perfect relaxation becomes more important and needs to be archived.
Spiritually, the umbilical or acacal is the human slidingtor of inner and outer world. It is also referred to as the junction of various chakras, the belly and the seat of harmony. In the dream interpretation, the navel is associated with dependency, e.g. a disturbed relationship with partner or mother.
The middle of the human body, also considered as the emotional center of man, is charged with meanings that do not reflect in the relics of everyday life that accumulate in the navel. As is well known in the art, humors or body livers are more likely to have a iiii sensation. The meaning of the origin is not implemented, rather they are considered a disgusting excretion. Without knowing what is in the screw, the gray parts could also be identified as licorice candies. The appearance is not disgusting per se, the aversion arises only in our brain, in the proclamation of experience, social character.
Without meaning the particles from the navel pulen indicates the relaxation of the acting brain. The lint is recovered without reflection and stored in a glass. They are not charged with background knowledge, just parts of themselves.
To return to Maden Stilenovic’s text and his proclaimed necessary relaxation for the creative use of the artist´s brain, the parallel project “OVERRUN” by Hubert Halsler clearly shows the resulting output. “OVERRUN” illustrates the contradiction of the cliché of “lazy migrants”. Especially in the plant world, the neophytes presented themselves as overcrowded industrious newcomers.
Hubert Hasler discusses the intervention or attack. Neophytes are rooting in alien areas. More and more living beings from other habitats are permanently becoming involved with us. Experts believe that over the past 500 years, around 800 non-native animal and plant species have been introduced by humans and actively abandoned. These are often room and garden plants, which used to be mostly introduced by researchers in the name of the emperors. Today the spread of seeds is supported by various reasons, i.a. freight transport and travel facilitation of the globalized time.
Our culinary life would be very restricted without potatoes, tomatoes, corn, melanzani, apricots and others. Especially Austria would loose some of the national dishes, such as potato salad, if we were dealing with neophytes as severely as with refugees. How much have these strangers joined us, have we grown together over time, can we imagine our own culture without these plants? Figuratively, the artist disappears behind the intruders who supposedly take the space for him.