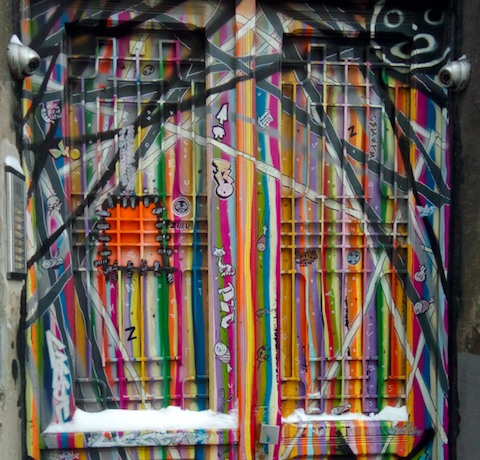 In our cycle „THE INFLUENCERS!“ we have set various targets for 2018:

*To strengthen female positions in contemporary artâ€¨*Pay special attention to language, identity and tradition, marginalized groups *To present the members of the artist-led gallery in an international context
We have invited artists from Canada, Iran, Serbia, Russia, Slovenia, Italy, Spain and the USA to work together in situ to develop displays that are extended and deepened through lectures and discussions.â€¨The combination of artists from different nations facilitates networking and brings people together through their work and joint projects. Artists from different countries bring influences from the wide world into our space, which then inspires us. For many years now, we have been able to convey artists abroad and to position the gallery internationally. We bring the world to us to live an example of multilingual and ethnically mixed artistic community.
We work according to the motto, there are no limits neither in art nor in thinking.
The curatorial approach of our series „THE INFLUENCERS!“ 2018 is a combination, confrontation, reflection – by means of ethnic, national and genre-related differences that are juxtaposed, artistic positions are crystallized in a different context. The communication between the creative works represent a visual level of communication between the artists and ultimately the audience.â€¨The open set ups, which we have tested for a year, remain intact. Experience has shown that the passers-by show fewer thresholds in a setting-up situation and the hard work that lies behind the glossy openings becomes transparent. Thus, for the viewer, the process becomes comprehensible and art, as well as the profession of the artist, becomes more tangible.
The permanent exploration of the space by in-situ projects of different genres combined with lectures, artists’ talks, workshops, concerts and performances creates space for experimental formats. 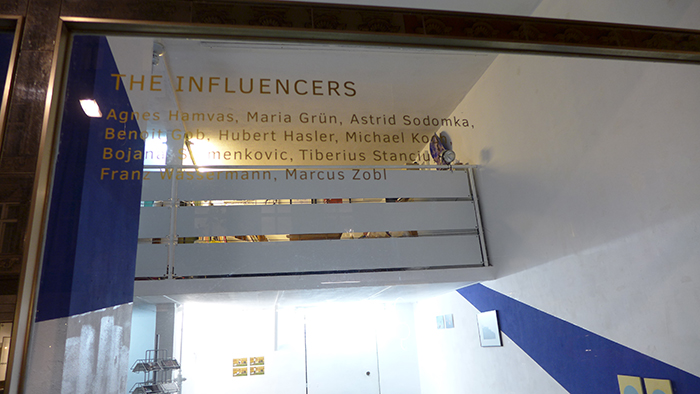 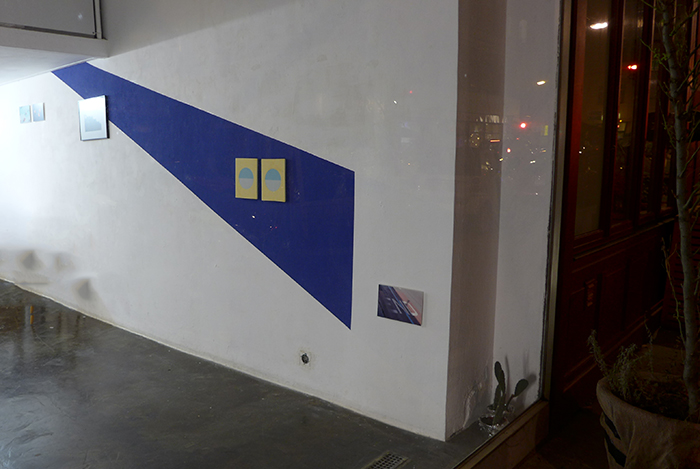 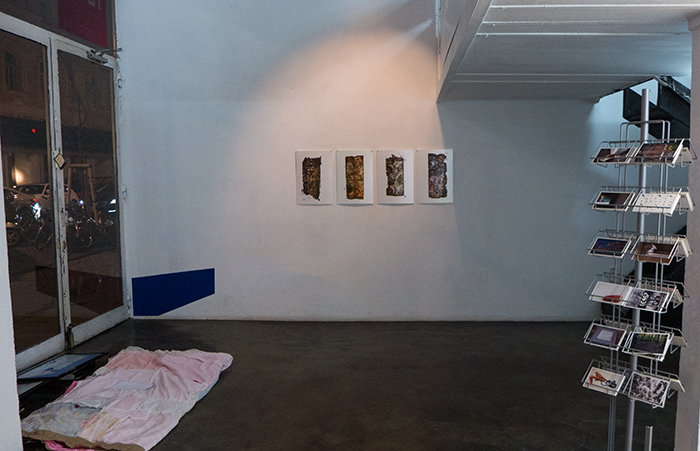 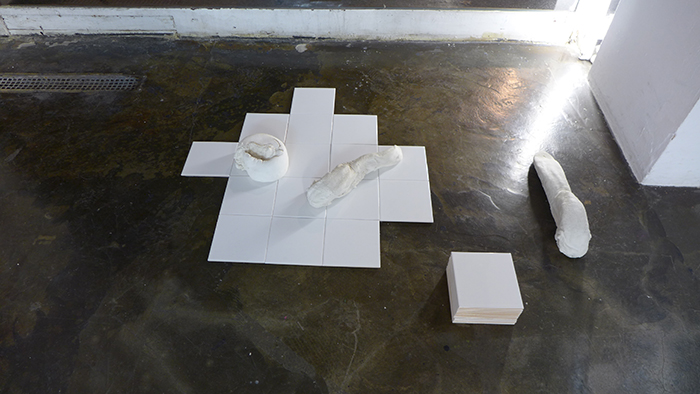 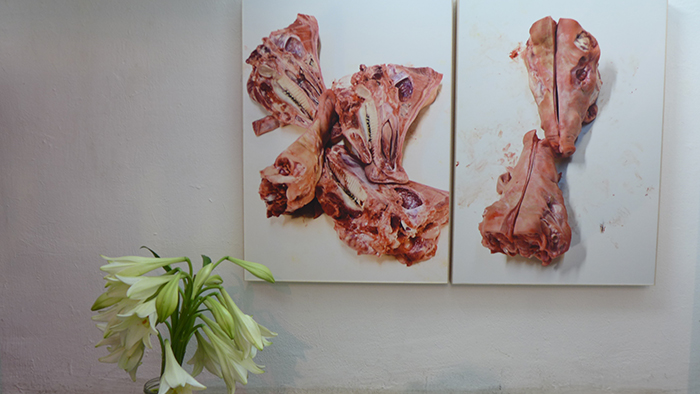 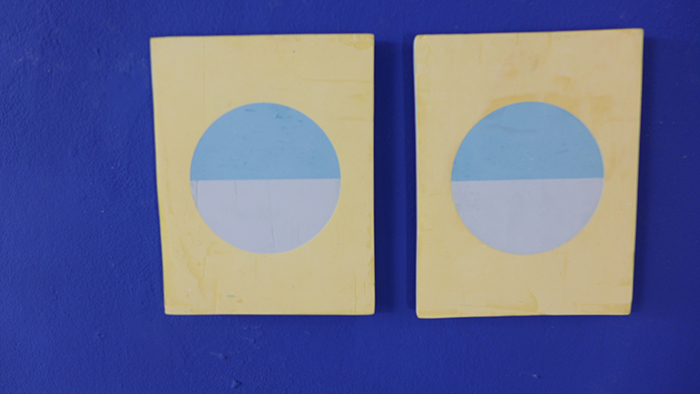 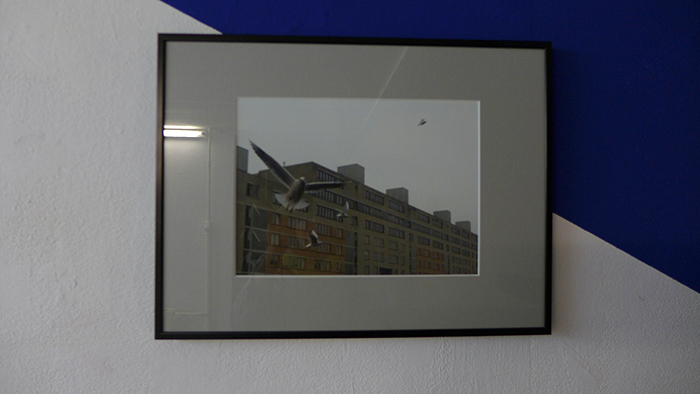 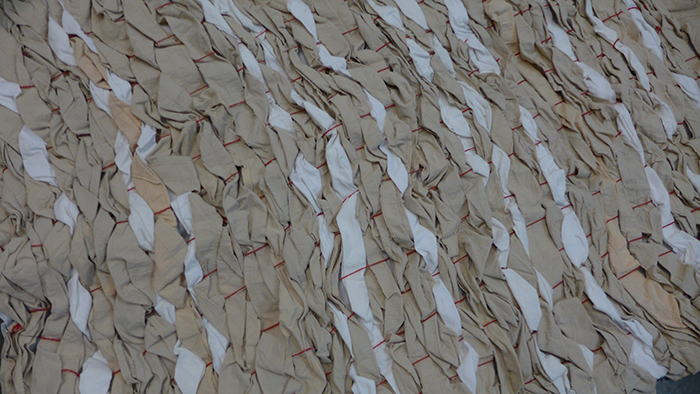 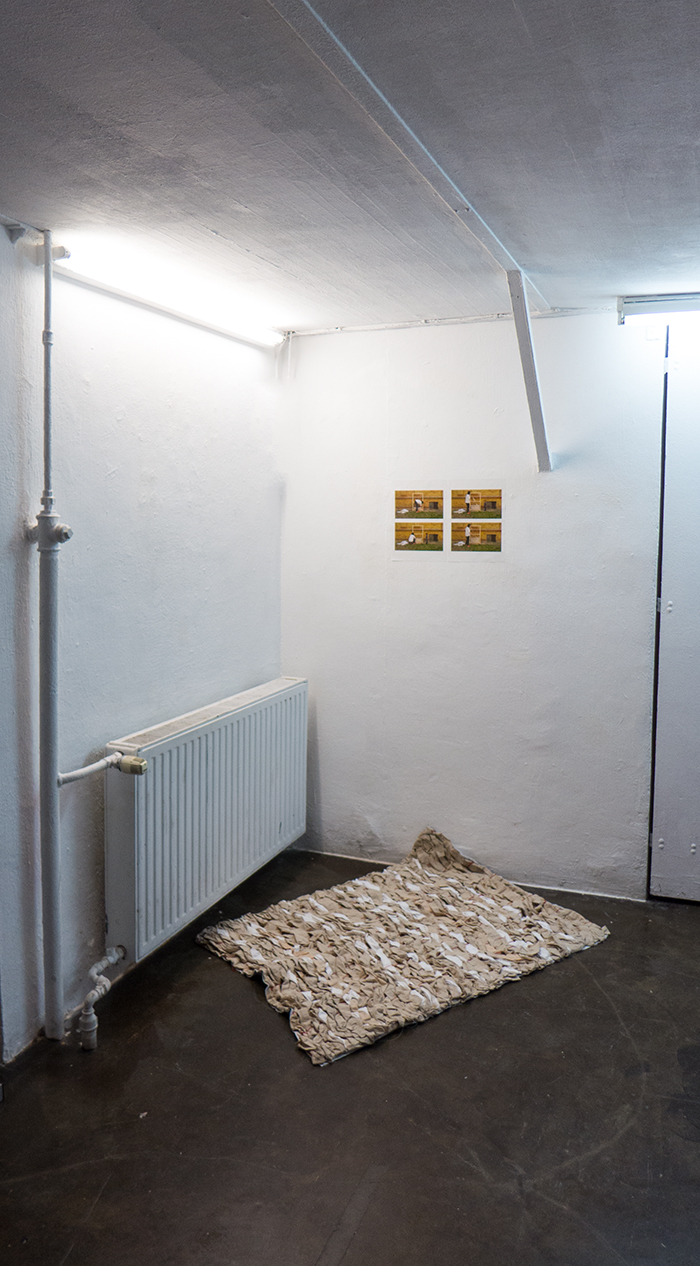 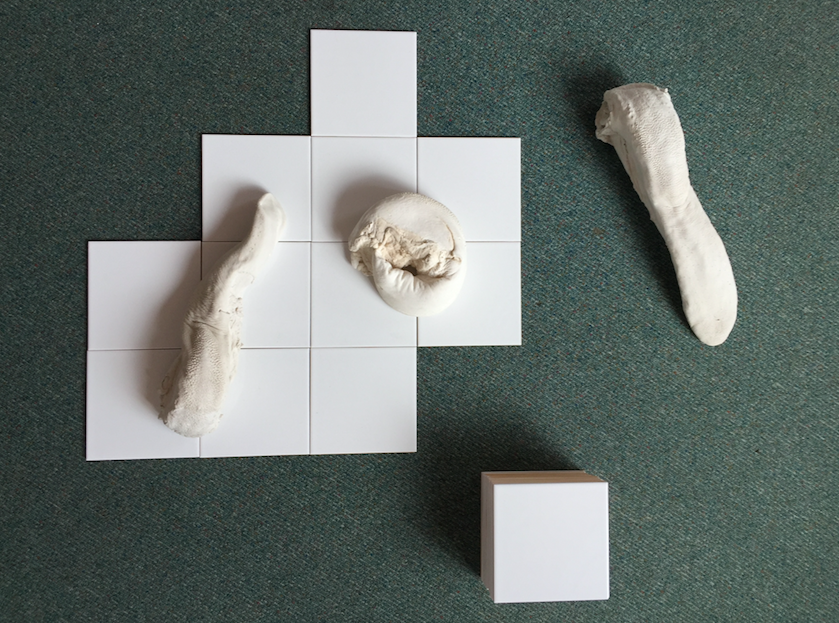 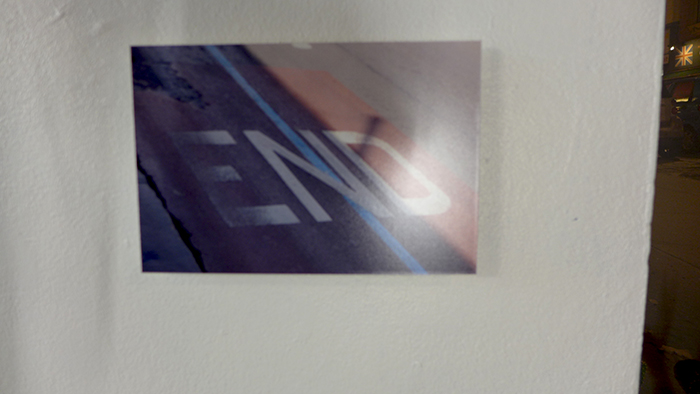 Maria Grün’s artistic practice focuses on realistic and hyperrealistic object sculpting and installation. In the course of her collaboration with other artists, she extends her spectrum to include animated film, videos and photographic works. Maria Grün’s hyperrealistic works play with the merging of the human body with the mechanical and the resulting components of the comic and uncanny. In her latest work Delikatessen she refers to the role of the animal in the Anthropocene. 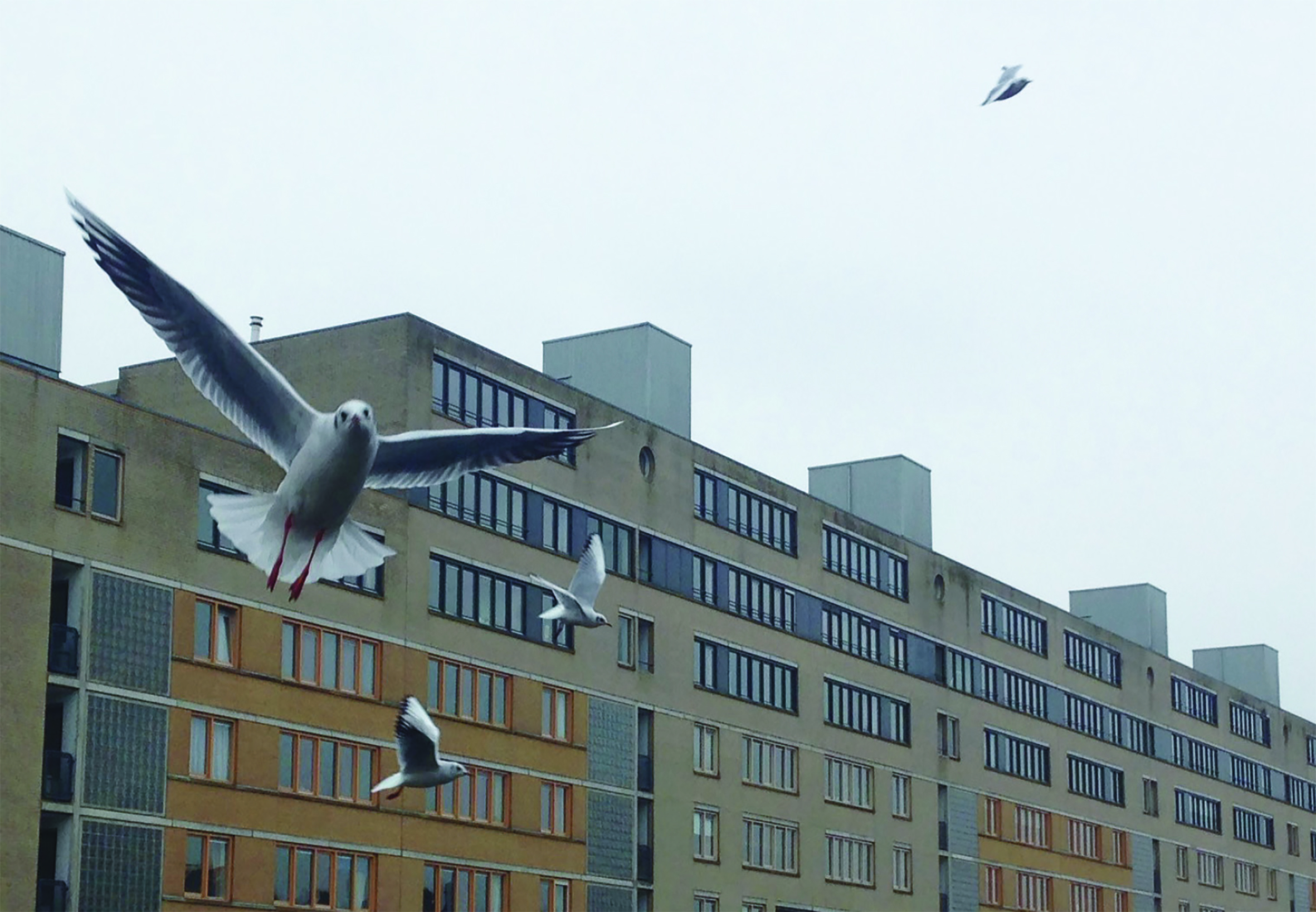 Ágnes Hamvas makes in her postcard edition „Jelentkezz“, 2017 and her sound installation „sync“, 2016 the main gap between perception and reality, visible and audible.
„Jelentkezz“ shows a flying bird, connected with the title, which means „write again“. The association immediately leads to expecting a carrier pigeon. The second connotation is dove of peace, an international icon. But the truth is that the flying bird is a seagull, a bird not known for a peacefully behavior. 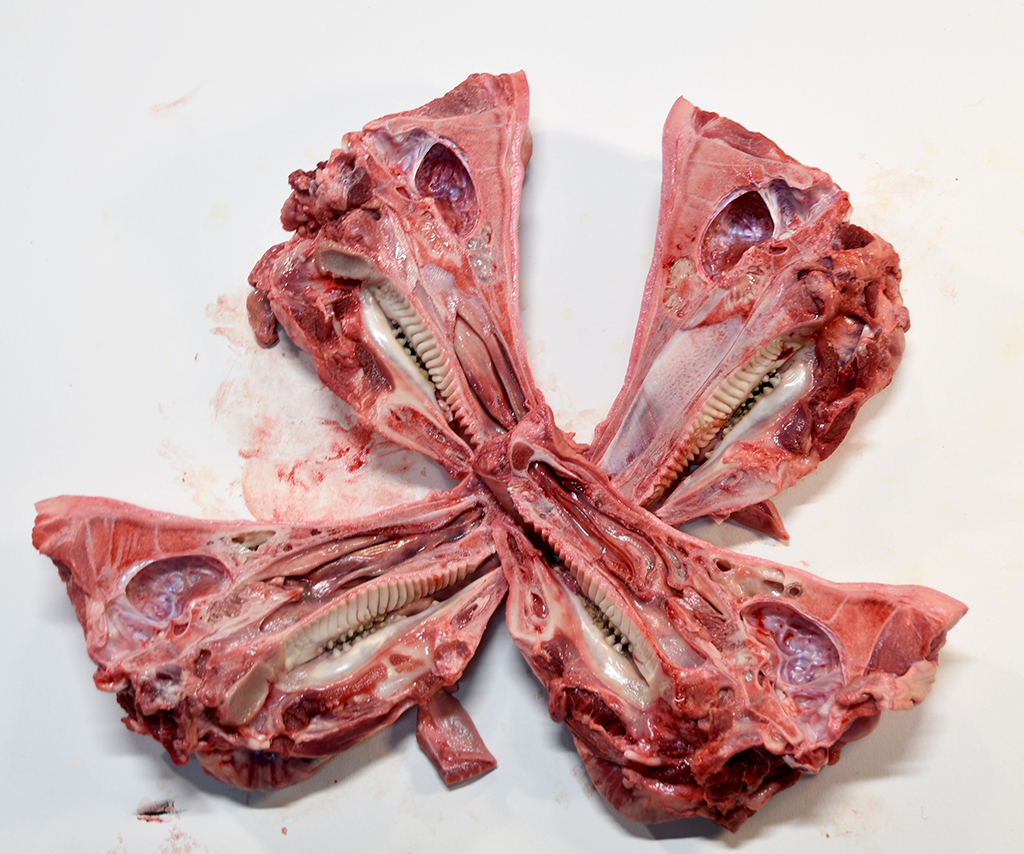 „Kiss Kiss“, photography 2018, by Hubert Hasler deals with the concept of an enemy and related attacks as well as with the obscenity of animal husbandry and nutrition industry of today. The waste of living beings on the one hand and starving millions on the other hand are deregulating every condition for a peacefully togetherness. 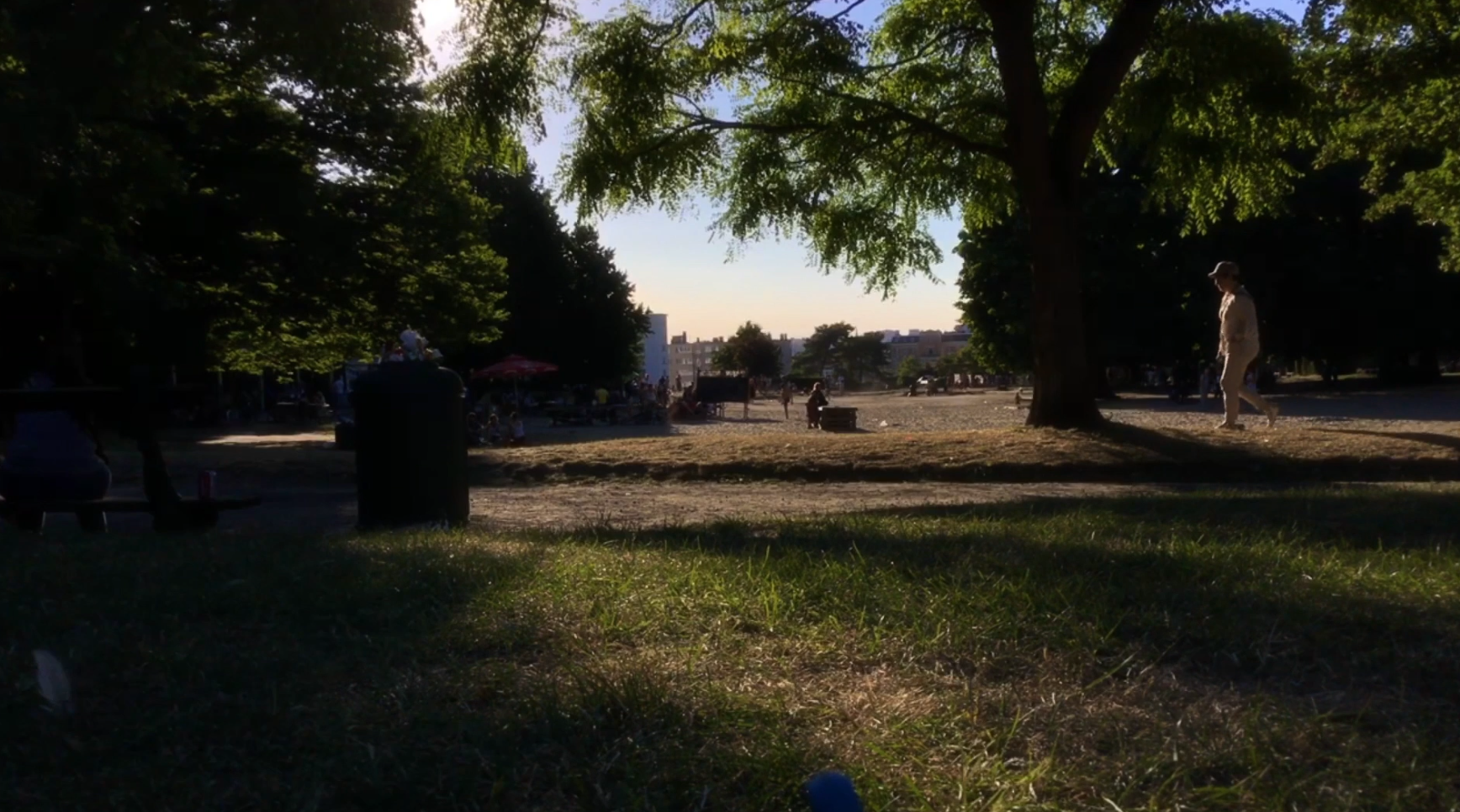 BENOIT GOB  “What would we be without the help of what does not exist? “

In the spring of 2018, after an animated discussion with an artist friend about the freedoms that our consciousness gives us the opportunity to explore, we challenged ourselves to work on an idea that we did not yet have. To start a project without direction, ideas or emotion.
So, on an inspiring sunny afternoon, I left home, looking for material. On the lookout for everything and anything.
When we search without knowing what we are looking for, everything can quickly take on other meanings, become irrelevant or the opposite.
I very quickly understood that I would not arrive at anything, that my process was vain …
To search was ridiculous, things had to come to me. I just had to give them room. I went to sit in a park, enjoyed the sun, and without too much conviction, I grabbed my iPad and captured a few sequences of an ordinary uneventful afternoon.

During the summer, on vacation far from all these concerns, surrounded by children, my wife and I were listening to a piece about Paul Valéry on the radio, and I heard this: “What would we be without the help of what does not exist? “.

All summer long, I could not get this phrase out of my head, inspired by the imagination of children who invented worlds and explained life to themselves with a magic wand.
Back in Brussels, I unloaded my iPad, packed with good memories. I watched the shots I had filmed in the park again.
I was fascinated by the simplicity of these moments.
Fascinated by their lack of “events” and because of this, the ease with which they could quickly be forgotten by everyone and anyone.
I looked at these images through the eyes of a candid child, without really understanding what had escaped me and made me feel this melancholy.

Paul Valery sounded in my head,
“What would we be without the help of what does not exist? “.

What would I be without my ghosts, my fairy tales, my false pretenses?
Without the glorious productions of my childhood’s imagination and illusions I unconsciously kept?
Man often lives with unjustifiable beliefs. He can not be content with the precise conditions of his existence.

He needs fantasy, to believe in other worlds, to ensure his prosperity.
I still often like to think of myself as a child and never really tire of dreaming other realities with unknown properties and magic formulas that escape me.

ACTION CARRIER is a series of pieces made with tape. Wassermann uses different procedures to manufacture the pieces: He sticks tape over photographs or newspaper pages of print media like e.g. Bild, Spiegel or Krone. In the following, the artist removes the tape and re-applies it on a blank piece of paper where the traces that the tape has been collecting from the media imagery become visible. Some of these text and image compositions are digitally enlarged and printed on handmade paper – this series of prints is called DATA CARRIERS. The curator Hubert Salden writes about the ACTION CARRIERS: “Franz Wassermann detaches information in the form of imagery or text from its context in which it had a specific function. This fragmentation abstracts, deconstructs and subjectivizes the data. (…) In appropriating this material, Wassermann saves himself from manipulation through the media and the resulting feeling of powerlessness when facing the reduction on sex and crime.” In addition to ACTION CARRIER,  tape as a material is used in various other pieces of Wassermann e.g. in  I and EVERYBODY IS ENTITLED TO A BREAK.