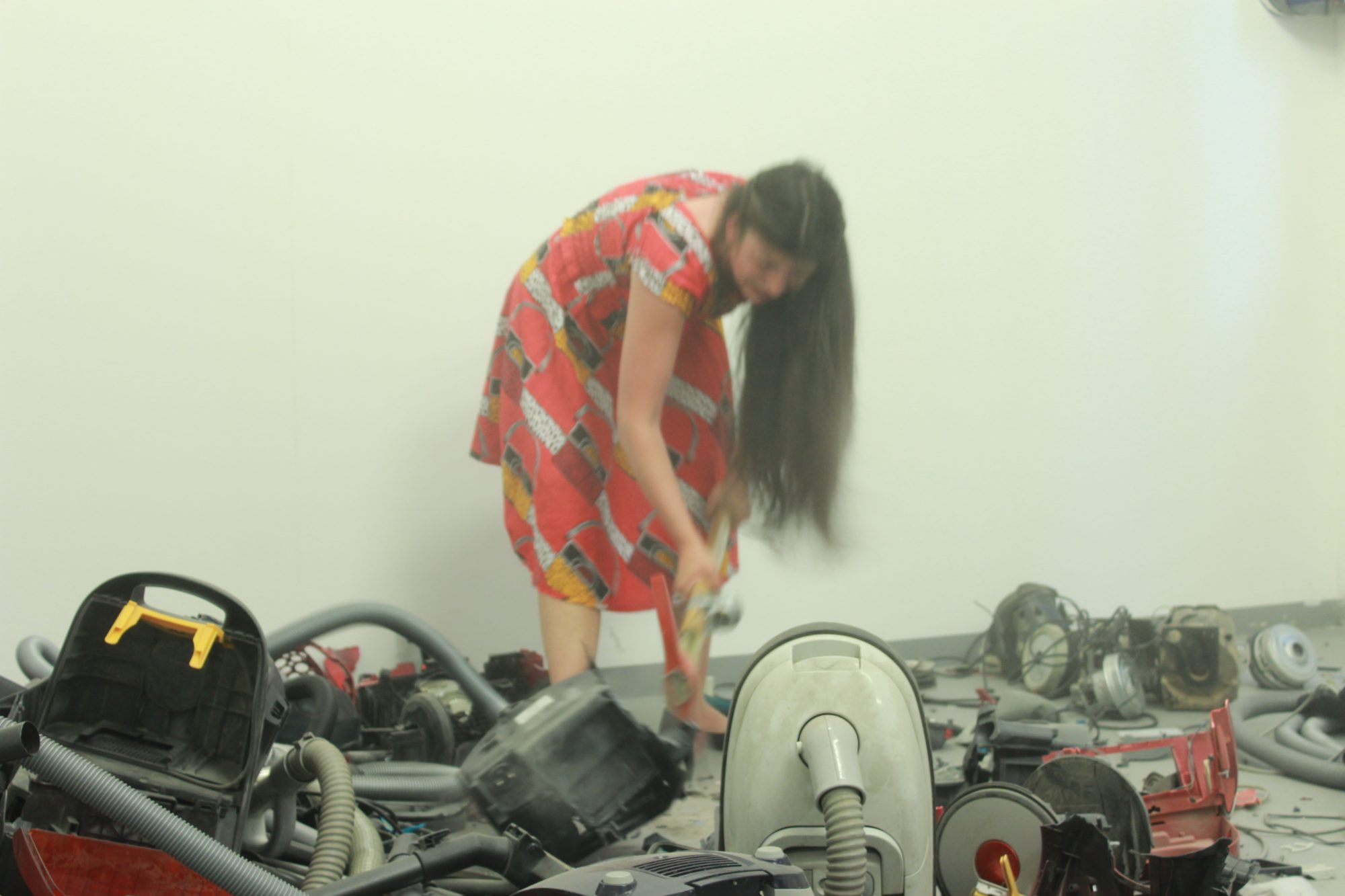 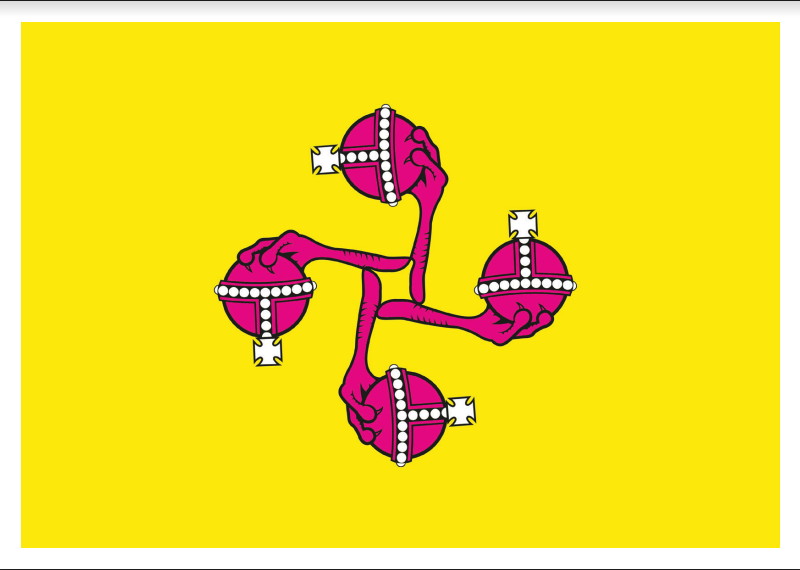 The plots between four different Cordial Points are mapped and the different medias have been checked with regard to their usability. There are four different approaches as well, though all of the art pieces created by Cristina Calderoni, Vera Klimentyeva, Selma Selman and Bojana Stamenkovic are dealing with deconstruction and new interpretation of traditional values. While Cristina Calderoni presents a sound file she has produced during her stay in a Residency on a lonesome island in Brasil, Vera Klimentyeva shows her new silk print edition, in which she is dealing with emblems and insignias. Selma Selman plays with the female role and Bojana Stamenkovic tells about changing even the sex for the impact on family welfare. They used medias are sound, silk print, video and installation/embroidery.

Heraldic symbols are questioned and dismantle, traditions are analyzed and new interpreted through education and alternative possibilities, communication as a tool for a better living together is applied again. The four cordial points are in a quite anachronistic analog world though they are completely contemporary art pieces. The common denominator of the four female positions is a transformation of process, changes, places, colours and last but not least our souls. Handpalms, eyes and voices are kind of door to human souls, where you are able to read about the personally character.

B.r.a.m.a., the project, was born during the performance „Nice to meet you“ that took place in the city of Vienna in 2017.â€¨People were invited to have a talk with the artist , during she was casting their hands. The sound is a recording of different voices, that she mixed together as a vibrating sound collage. The topic was Home. Home is something that everyone is looking for, home is a feeling, is freedom, is love.

People talk by talking. Cristina Calderoni took talking as a medium of empathic experience in a frame of political and hedonistic approach, kind of research and reflection of the status quo of nowadays society. The notion of „the public“ must be renegotiated, what does public include, where is the border to privacy. An intimate situation between artist and model allows for a greater openness, even though it takes place in the public space. The possibility to read a voice like a hand palm forces to build an inner image of that person. The voice can’t escape, only can turn mute – which would be a refusal and the end of the cooperation.

The Audio on Vinyl tells about transforming, creating a process, about changes. The voice transports the condition of the subject, but also the base invented and given by the artist. For open chats the starting point has to be created as a pleasant environment, where the soul has the chance to become transformed through a common act. Brama comes from to whish, to desire – to feel the voice as a declaration of desire for another society, a kind of better world, for an exchange between us, for a togetherness, Cristina Calderoni uses the traditional ceremony of talking in Salons as a tool for transforming bad habits of today. To stop, to sit down and to get involved in a conversation, to be aware of stepping out of the daily tour de force and enjoying a retarding moment for arranging and  digesting thoughts. Thats the moment to become aware of here and now and the basic meaning of society and friendship.

Visual artist focused on topics of identity, over identification, religion, social role models, deconstruction and transformation. In her artworks she seeks explanations and answers to various questions in regard of nowadays situation of different contents, which often deal with spiritual aspects, gender roles, such concepts as home, cultural heritage, unconditional love, stereotypical national features and symbolism. Working in fields of fine arts and graphic design, she uses techniques of printmaking, painting, photography and digital collage.

The project is a series of silkscreen prints and is examining the idea of national symbols and their deconstruction and transformation in terms of epochs and trends. Emblems, signs of solitary power of monarchies and dictatorships, used and charged with importance. Taken out of context, they are a kind of pictograms, symbols that convey values. She deconstructs the signs of power, breaks down emblems out of the army emblems of USSR and emblems of Russia, into individual symbols. Extracted or reinterpreted, the previous meaning is lost; through its colorful coloring, it resembles more signs of youth culture than political symbols of power. By exaggerating into the absurd Vera Klimentyeva makes the banality obvious, the signs are revealed.

Self-Portrait: AEG Vampyr 1400 is a performance where Selma Selman destroys  vacuum cleaners, sorting both the valuable parts and the less valuable parts. The metals and the motors are valuable, but the plastic is worthless. In addition, Her family’s everyday survival is dependent on this exact same labor. This highlights the subjective nature of the value of this labor – her family survives by selling the metals, and she survives by exhibiting them as performance art.

In addition, she is destroying a technology of house-wives’ domestic imprisonment. This act allows me to free herself from notions and tools of domesticity and establish her own integrity and identity. The twist from the inspired house wife romance of a telly advertisement out of the 50ties to the boyish figure in black tank top who confidently strolled through the junkyard tells the whole story of her life and the anchored traditional role allocation. Switching between cliché and reality, sex and social role models, raises more and more relevant questions.

Bojana Stramenkovic combines anthological and sociologically approaches for analyzing traditional phenomenons in 21st century. Her concern is gender research as well as a kind of reflection on the position of women. This time her artist research was inspired by the film Virgina, directed by Srdjan Karanovic in 1991, Yugoslavia,  and the text of Suzana Milevska;  The film Virgina  tells the story of Stevan,  a young heir of a family that is cursed because of having too many female children. Stevan is thus designated to live as a boy by “his” own family. Actually, the family follows the ancient custom of “sworn virgins” (“virgina” or ”tobelija”) in order to avoid the heavy social censure of an all-girl offspring. The loud celebration accompanying the hoax announcement of a boy birth later turns out to be a heavy burden in Stevan’s life. Being stamped by the ancient custom, Stevan goes through confusing situations being both a girl and a boy – having much more than the usual secrets to hide.

Bojana Stamenkovic honours the traditional techniques of embroidery but uses it in combination with contemporary interpretation and reflections to female connoted handicraft. In her new work she put a more picturesque spin on stitch, pretending to paint with threads. She also transforms photographs in needle images, her paint are sewing needles, her brush a hammer.

To plait a braid out of the threads of history, tradition, habits, gender, economically needs Bojana Stamenkovic points out the paradox of archaic habits and opens a discursive discussion about education, values, female and human rights.