Do you remember being lovestruck?

When butterflies swarmed your gut and goosebumps covered every inch of your skin and a wave of emotions swept over you?

A similar effect awaits you at the installation titled ‘Afterimage of Love’ by Yumi Watanabe; a revisitation of feelings you may have once had.

‘Afterimage’ is a non-specific term that refers to an image continuing to appear in one’s vision after the exposure to the original image has ceased. Positive afterimages replace and layer in hues similar to those of the original sight. They are often very brief, lasting less than half a second. However, a stimulus which elicits a positive image may also precipitate into a negative afterimage via the adaptation process.

Carefully numbered to an exact 1001, flower petals romanticise the interior walls of the gallery. Artificial petals made of overpainted and laminated photos, each of which is anecdotal in both form and essence. The artist creates and furnishes these petals of “afterimage”, using a process connecting analogue and digital tools of photography. Reminiscing of a classical image of love as seen in movies, scattering petals everywhere, like in Sam Mende´s ‘American Beauty’, Yumi Watanabe is tracing petals of memory and leftovers of love. This ‘afterimage’ is the origin of Yumi Watanabe’s relentless search for her memory from the past. The memories appear in fragments, occasionally in an instant flicker, but they never cease to bloom into alluring blossoms. Fallen and scattered, they remain within ourselves and render the gradient from which we periodically analyse our situation.

Delving deep into the struggling roles of history and memory, the perspective and personal interpretation of the artist provides a manual for understanding ourselves. The visitor is navigated by the artist towards the ‘haunting and activating’ qualities of memory. Art that engages with memory embodied in material and spatial conditions is examined alongside works that reflect upon memory’s effects through time. Contextualizing the role of memory in visual theory and aesthetic politics, Marcel Proust’s optics to Bernard Stiegler’s analysis of memory’s ‘industrialization’, this exhibition surveys the diversity of situations and registers in which contemporary artists explore memory as well.

Yumi Watanabe was born and educated in Japan. Nowadays, she is a commuter switching between cultures and continents, dividing her time between her home country, Japan and her current base, Düsseldorf as well as in Tijuana, Mexico for producing parts of her work. She weaves diverse influences of philosophical and historical impacts and offers opportunities to experience those in her work.

Yumi Watanabe is one of the most interesting and complex thinking contemporary artists at the moment, particularly because, she tries to combine and play with typical influences and their often unpredictable corresponding consequences. 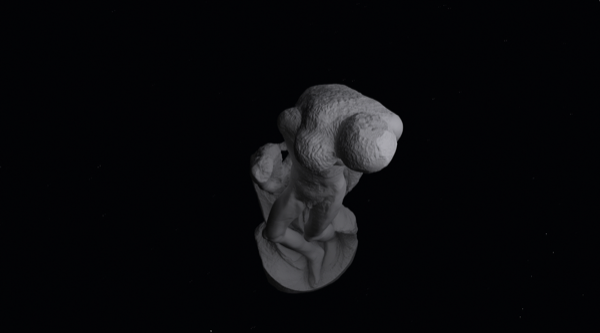 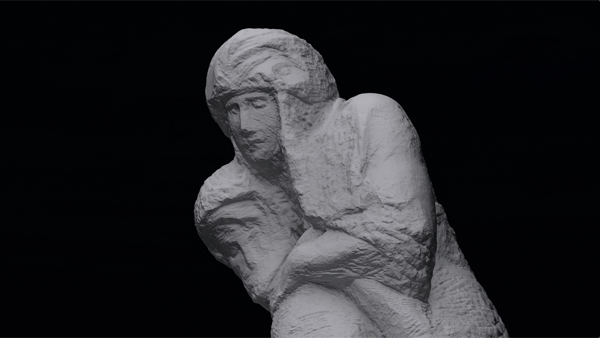 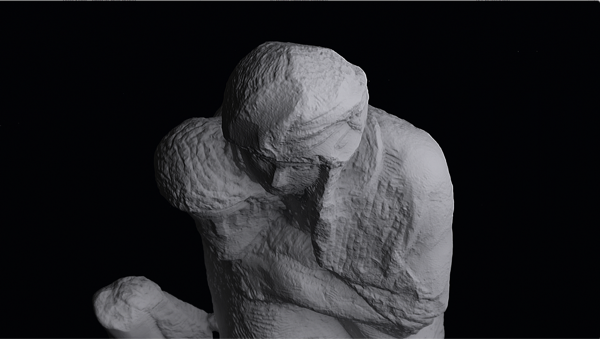 The meaning of this project stems from the deep desire to interact with the latest work of Michelangelo and from a reflection on the power of photography to transform things through the light. Activating something like a theater scene, I have enlightened the Pietà Rondanini and every movement of the light source changed my perception of the masterpiece. I felt that the act of illuminating revealed that finished-unfinished character typical in Michelangelo; a right choice to give visibility to the process of hybridization between form, matter and light. In the spirit of the continuous, unceasing experimentation belonging to Michelangelo, from the 3D model of the statue I have developed a video and picked a few frames – a work in the work – which through the light, the rotational movement, approaching and departing, generate a dialogue between the statue and another dimension, immersing the work in a sort of starry “hyperspace”. An ideal temporal crossing: a “simultaneous time” where what is before and what is after are together. The idea, focused at a first glance on the greatness of Michelangelo’s latest masterpiece, had a further turn in connection with the daily drama of the diaspora of a multitude of people escaping war and famine. The word AUXILIUM, which I drew with an unreal light over eight images, symbolically transfers this immense pain on the figure of the Mother who with infinite compassion embraces everything.

The title In aliam figuram mutare finds finally its sense in the images of human figures wrapped by thermal rescue blankets, through which I rebuilt the plasticity of Michelangelo’s sculpture, of those volumes that I had dissolved with the light in the initial images of the project. It is not only a restitution of form, but a transfer of meaning, a movement, a translation, beyond the moment of the representation.

A myriad of reading Yumi Watanabe’s work, a tête-à-tête

Recently I see a growth of interest in discussing the collective memory in the arts. It takes on various forms, for example the archival effect in digital age and how it reconstructs memory through algorithm. Of course in this case the political recall resonates with our current social situations. However, does this “confrontation” through art surpasses the echoing noise, or only creating a halo of simulacrum instead? Whereas, in your work, I see a net of tracing back to personal memory. Are these afterimages created through a structural process or is it more like an excursion into the past? Which process is more important to you? How would you comment on the collective versus the personal? Wandering through the multiple possibilities of reading your work, I encounter a desire to find the fil d’Ariane, whilst questioning its existence. I’m curious. Have you ever got lost in your own memory meandering towards the past? I can imagine that the unfathomable nuances of the past are haunting you, like it would to anyone. In this labyrinth, how would you build the walls in order to pass through? Or is it a spiritual dérive? Or is it a cartographic process?
Another aspect that I’m interested in lays in-between the scientific and the mythical. In other words, can object encapsulates immediate emotions occurred in the past? Unless this emotion is shown through action, an action of creating itself. However, in your work, I don’t see any violent gestures. The subtlety remains the strongest impact. In the darkroom, would you consider that you are performing a ritual? If so, does it connect to any personal believes? Sometimes I wonder what it feels like to be able to look from the perspectives of these “afterimages”. Do they all lead back to a single subject, which is the creator? Or, a certain distance is created once they were born. They no longer act as the lynchpin towards the source. Do they have their afterlives?
I cannot look past love when I see your work. That’s what struck me at first sight. The intrinsic complexity of being, of dealing with the sabotaging powers, though resulting in a balanced state, but that’s the afterwords. As Roland Barthes asserts in A Lover’s Discourse, “starting from a negligible trifle, a whole discourse of memory and death rises up and sweeps me away: this is the kingdom of memory, weapon of reverberation.” Was this the case when you were in the darkroom? A reenactment of the incidents of love? Does it matter to you that the viewer would also experience or recall their moments of daze?
In another episode Barthes expounds on the annulment of the beloved object (“To Love Love”), “I should see the other in the guise of an inert object … I sacrifice the image to the Image-repertoire.” Was this a point of departure considering your own work?

In our former conversation, we talked about the philosophical implications and symbolic meanings the work could entail. That goes back to the ouroboros, as each imagery (resin plate) functions as a window to enter the world of infinity. Along with the holographic theory, that each individual fragment of the whole contains the entire universe. In other words, together the imageries represent a multitude of phenomena, as equal ways to understand the unspeakable thing that stays at the core of existence. In this sense, nothing will resound like the ontological meaning the work embarks on.