I EXIST is the first solo exhibition of Selma Selman, Bosnian artist Roma origins, currently based in Syracuse, NY, in Vienna. The show, curated by Jasmina Tumbas, presents Selman´s struggle with the statelessness, multi-generational trauma and survival. Land and body becomes sites of emancipation and persecution for Selman, wich the artist explores in video-works, paintings and performance work.

Selma Selman complicates the notions of what it means to maintain self-sovereignty as a foreigner in her land of origin and he current home. Ultimately, her search for political resistance situates this confrontation within the gendered and radicalized presumptions about citizenship, belonging and identify. 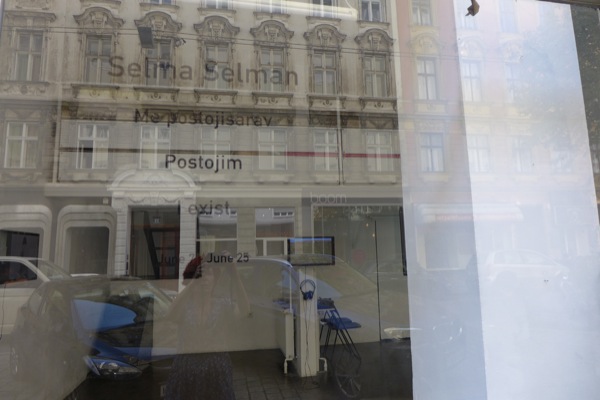 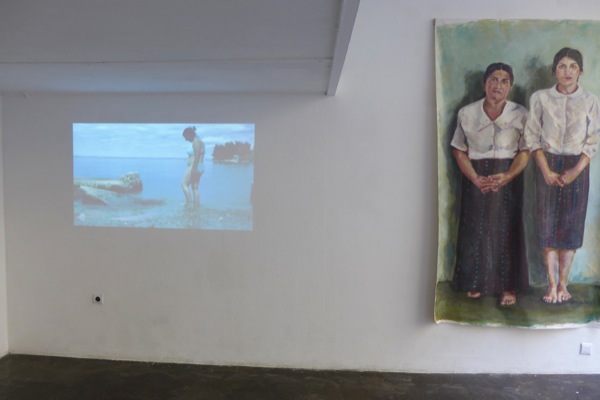 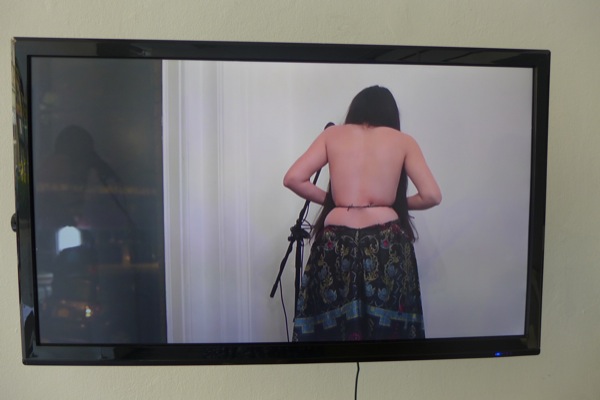 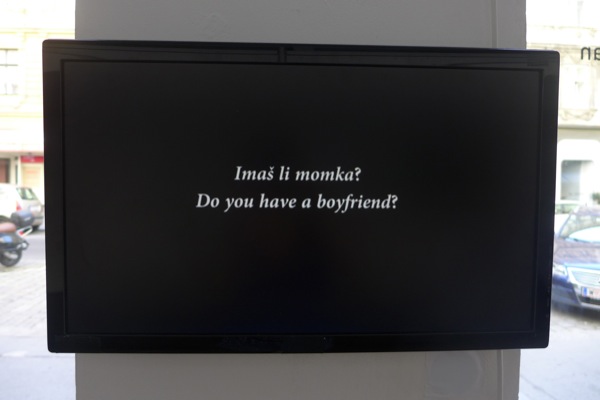 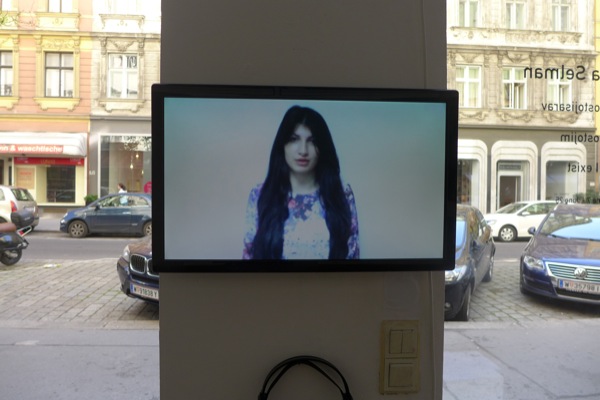 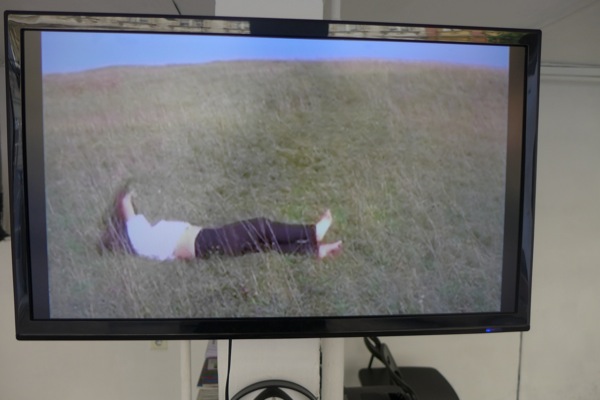 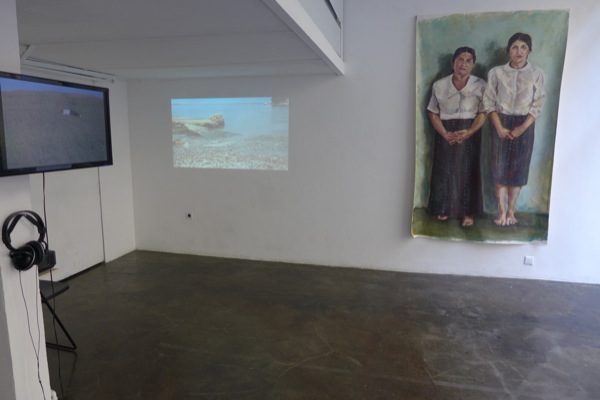 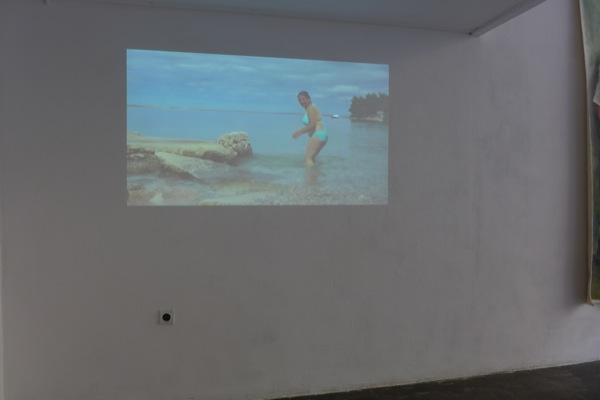 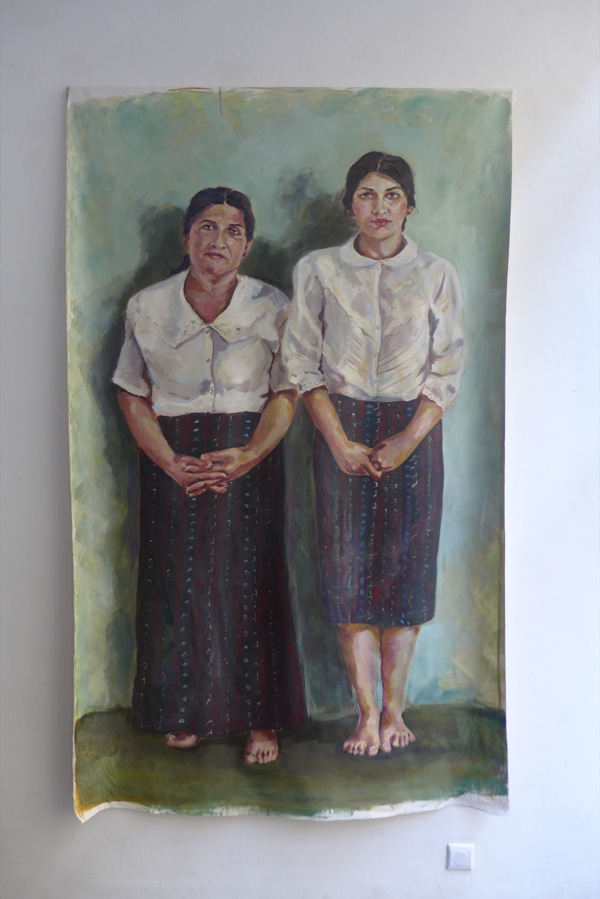 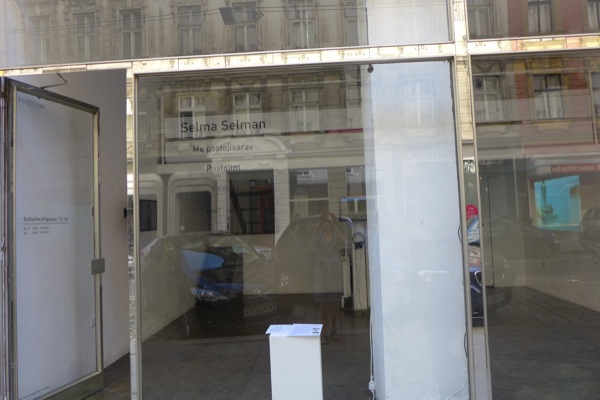 Curated by Jasmina Tumbas, Me postojisarav – Postojim – I exist, is a solo exhibition by Selma Selman, Bosnian Artist of Roma origins, currently based in Syracuse, New York. This is her first time exhibiting in Vienna, Austria, in the gallery Schleifmühlgasse 12-14. The exhibition is conceptualized around Selman’s struggle with questions of statelessness, multi-generational trauma, and survival. Land and body become sites of emancipation and persecution for Selman, which the artist explores in video-works, sound sculptures, paintings, and performances. Selman complicates the notions of what it means to maintain self-sovereignty as a foreigner in her land of origin and her current home. Ultimately, her search for political resistance situates this confrontation within the gendered and racialized presumptions about citizenship, belonging, and identity.

Selma Selman was born in 1991 in Ruzica, a Roma settlement in Bihac, Bosnia and Hercegovina. Ethnic Roma constitute the largest minority in Europe and encounter systematic discrimination, persecution, segregation in schools, and massive deportation. At age 19, Selman left the settlement for Banja Luka, where she earned her Bachelor of Fine Arts from the Department of Painting at the University of Banja Luka in 2014. There, she worked, among others, with the renowned Bosnian performance artist Mladen Miljanovic, who represented Bosnia at the 55th Venice Biennial in 2013. Selman participated in Tania Bruguera’s International Summer Academy in Salzburg, ‘Arte Util’ (Useful Art) in 2013, and she was a fellow for the Roma Graduate Preparation Program at Central European University in Budapest, Hungary the following year. In 2015, Selman was the recipient of the prestigious Young Visual Artist Award for best young artist from Bosnia and Herzegovina, with a residency in NYC. She is currently working on her MFA at Syracuse University.

Though this piece refers to the specific circumstances of my life, I believe that it carries a universal message. We have no idea about the struggles that others are facing. We have no idea, but we think that we do. 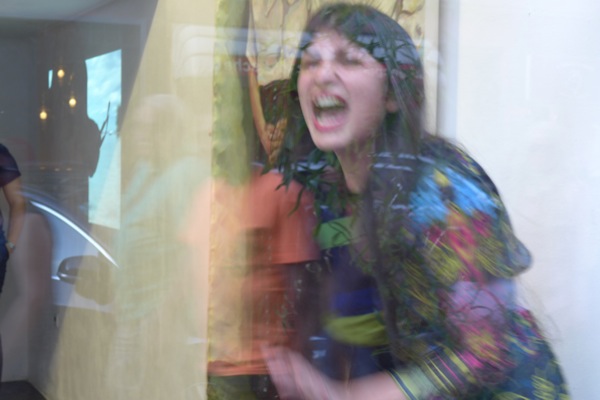 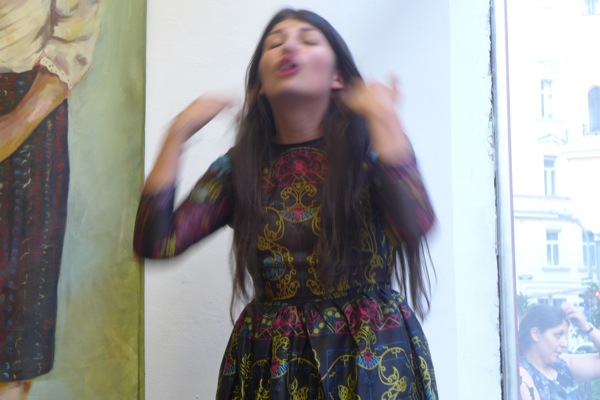 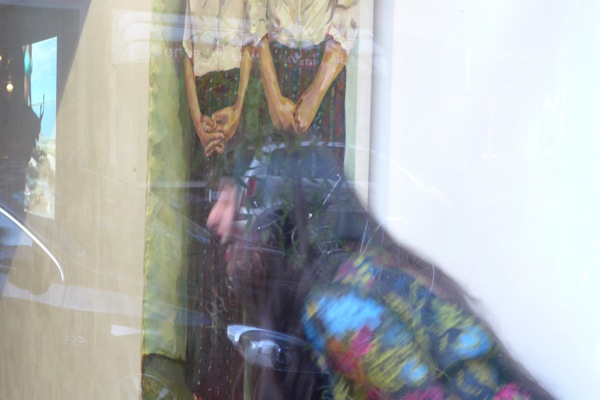 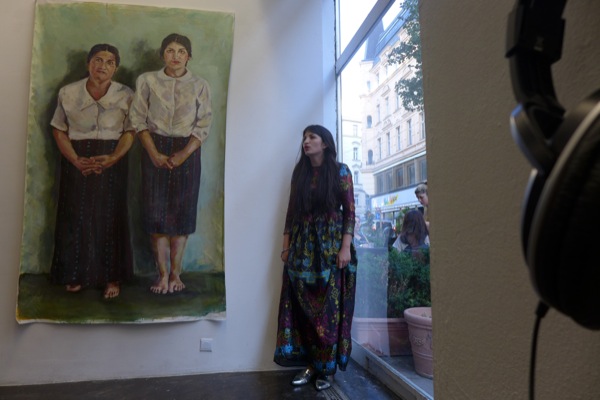 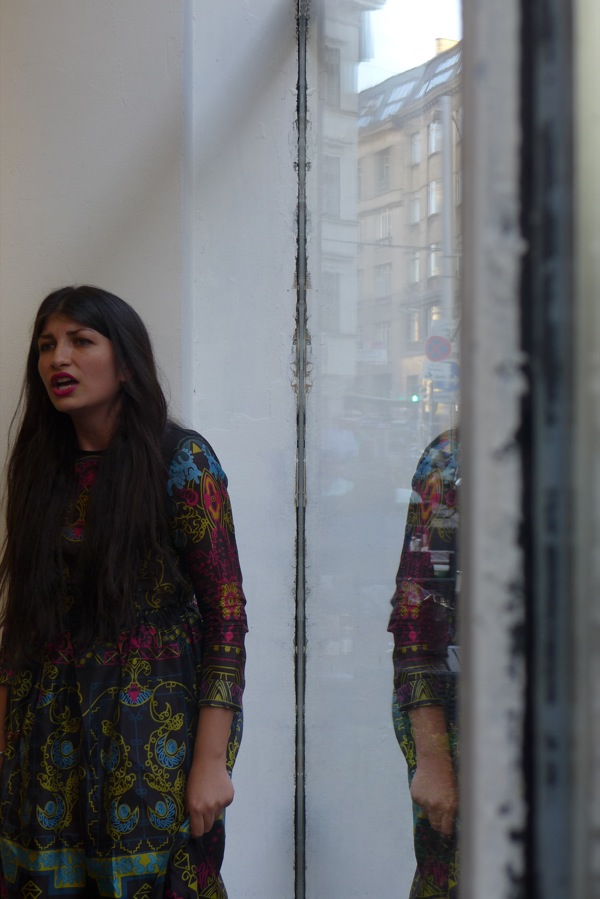 With my performance, I wish to emulate the sound of pain as it represents my mother’s past. She got married at a very young age. At thirteen, she became a bride. Still a child, she shouldered the burden of a woman, taking care of everything in a family home. The “role” of the woman is to feed her children, her husband, and the entire family; she is to cook, to clean and to serve everyone silently. This is what my mother’s life looked like. I want to be in my mother‘s body – I want to feel her struggle in combination with my own pain.

My performance portrays the tradition of child marriage, where the decision to marry is made for the child by its parents before she is even able to make decisions for herself. This performance exsposes an indifference to the rights of women, to the experience of a marginalized group of people, to the potency of nationalism and racism.

The “belt” seen in the performance pinches my waist, so that it may be made very tiny, because a slim waist is supposedly a mark of femininity.

I choose to turn my back to the audience.

With my back visible, but my face hidden, I create a private self. My face is hidden as my mother’s was: for forty-seven years she wore one of two masks, either the mask of a wife or a mother. For forty-seven years her real face was hidden, made insignificant and invisible to the outside world. 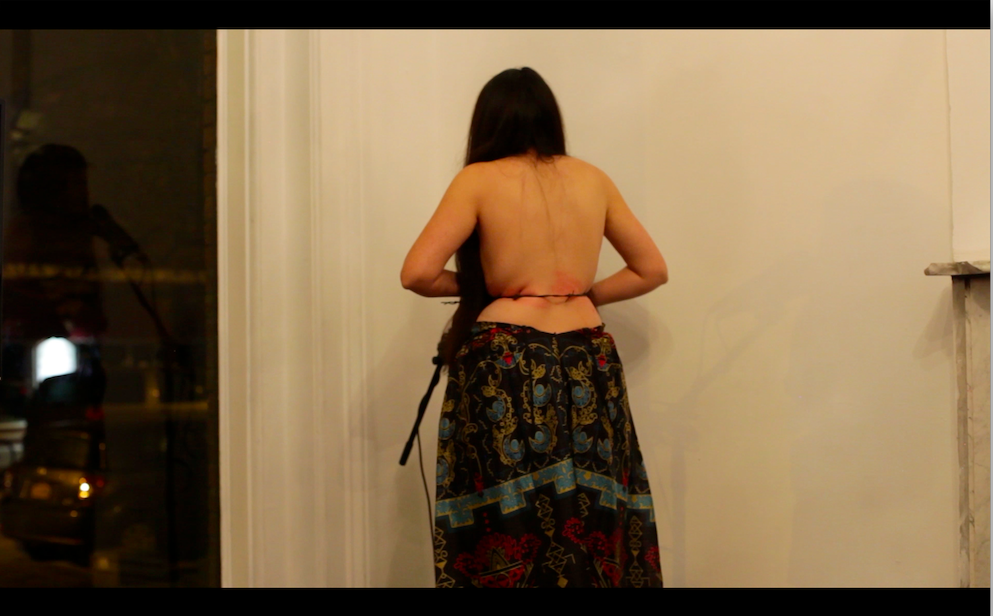 Do you have a boyfriend?

This video refers to the cultural views of my people that demand that girls should be married at a very young age. This work questions the limits of tradition.  A banal question renders an absurd political answer: “Do you have a boyfriend?”. I seek to cross the boundary of this part of my tradition, to reject it, to fight against it. 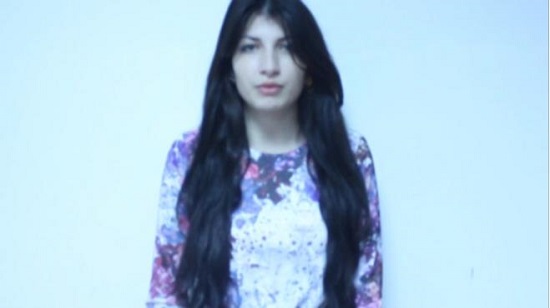 In this performance, filmed in my hometown, Bihac, I sought to capture the nature of repetition present in our lives. Life is cyclical, for every death, there is a birth, and with every birth there is death. I often feel as if this is true for my own life – just when I believe that I have resolved one set of problems, yet another appears. This work is not just about me, it is about you, it is, in fact, about us. This is our lived reality. Sometimes we stand at the peak, at other times we fall deep down in the valley, and then the cycle repeats. Rolling down the hill represents survival. 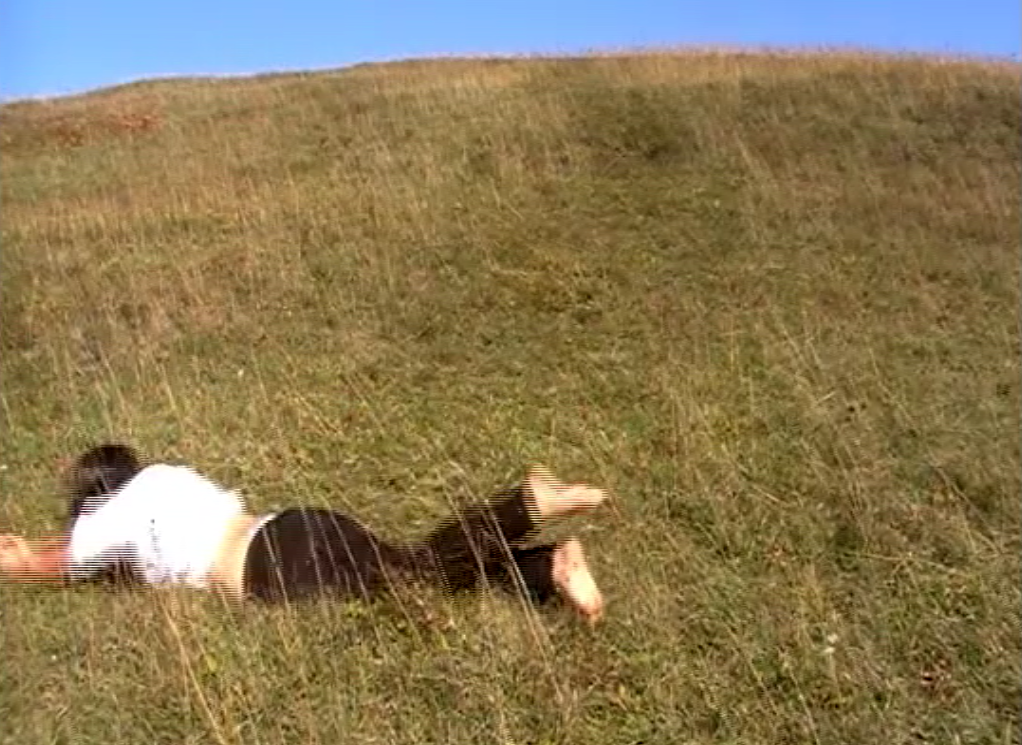 “Do not be like me”, is a phrase that I have heard escape from my mother’s mouth too many times. In five words, it is a phrase that encapsulates the relationship between my mother and myself.  My mother was born in 1967. In the Romani tradition, her marriage was arranged at the tender age of thirteen. I do not have the authority to declare our traditional ways as a “mistake”, but I do have right to say that tradition must have its limits in our everyday lives.  At the time of her marriage in 1980, she was obligated to respect tradition and to accept the rules set forth by her parents. She did not have a normal childhood; she never attended school. She spent her life as a housewife and mother. Throughout my childhood she would give me advice, “Dear daughter, when you grow up, do not be like me.” She was never in a position to teach me or help me with any of my school work, nevertheless, she taught me how to be strong. She taught about the strength and bravery of “silence”; she taught me how to fight with “silence”.

I am similar to my mother. Today, I look like my mother at twenty-five. Despite the similarities, there are marked differences between us. At twenty-five, she had been married for twelve years and had birthed five children. At twenty-five years old, I am not married, I do not have children, I am educated, and I am an artist and a teacher.

This painting depicts the identity of one person in two bodies. This piece could have easily been a photograph, but it was not, for something is stolen from the artist’s hands through the lens of a camera. I wanted to experience the art of creating us, that is, my mother and me, of painting on us on a canvas by my own hands, with my own lines and colours, in my own way – I wanted the canvas to drink in a part of her and my soul into its pores.

The video is about my mother and her first contact with the sea. Her greatest wish was always to see for herself if it is really salty like she heard that it was. In this video, I captured that first moment and her reaction.

“at 47” refers to her lack of documents when she came from Kosovo to Bosnia. Culturally, the act of a woman leaving her paternal home to live with her “husband” is perceived as a marriage, whether or not it is officially recognized by the state or religious authorities. At that time in particular, there was no concept of simply “living together”. Hence, at thirteen, she was unofficially married to my then seventeen-year old father, but the marriage was not state certified. After the dissolution of Yugoslavia, she was left stateless. In 2014, after many discussions with authorities in Bosnia and Herzegovina, she managed to obtain Bosnian citizenship. After 47 years, she received her first passport. I decided to make her wish come true. I took her on a vacation to the sea. 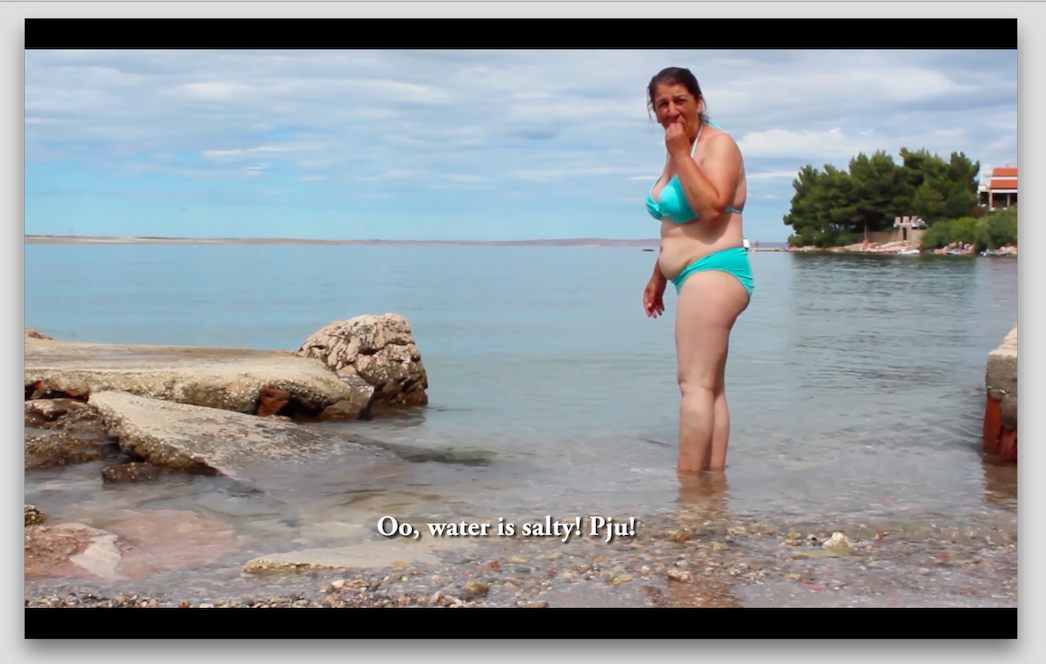