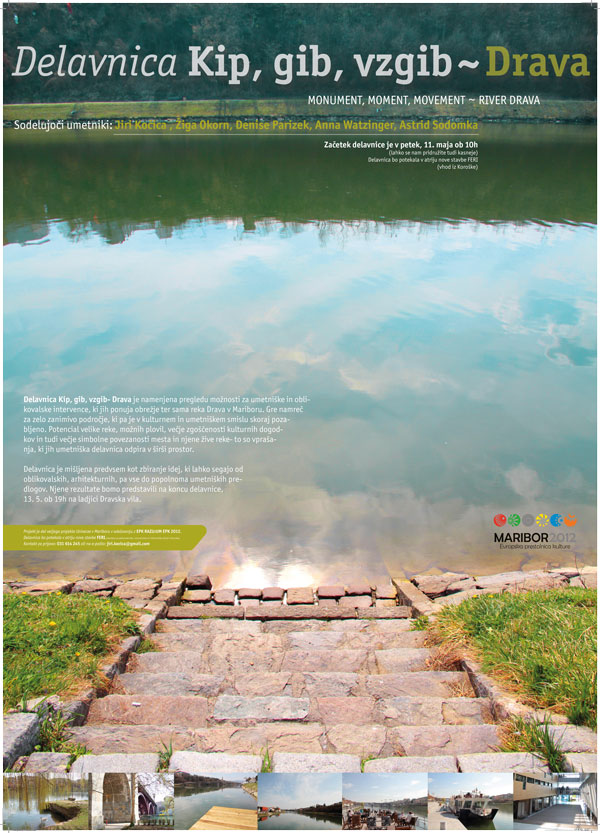 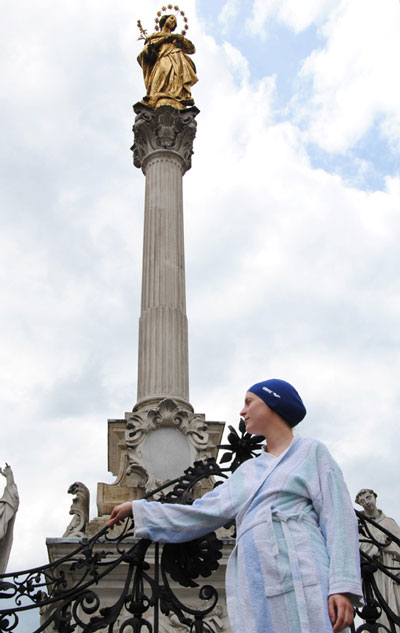 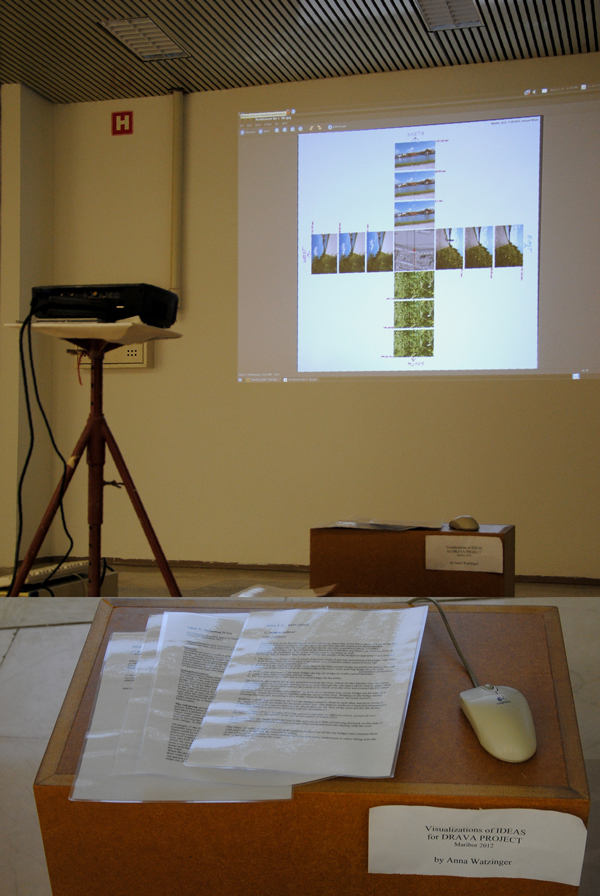 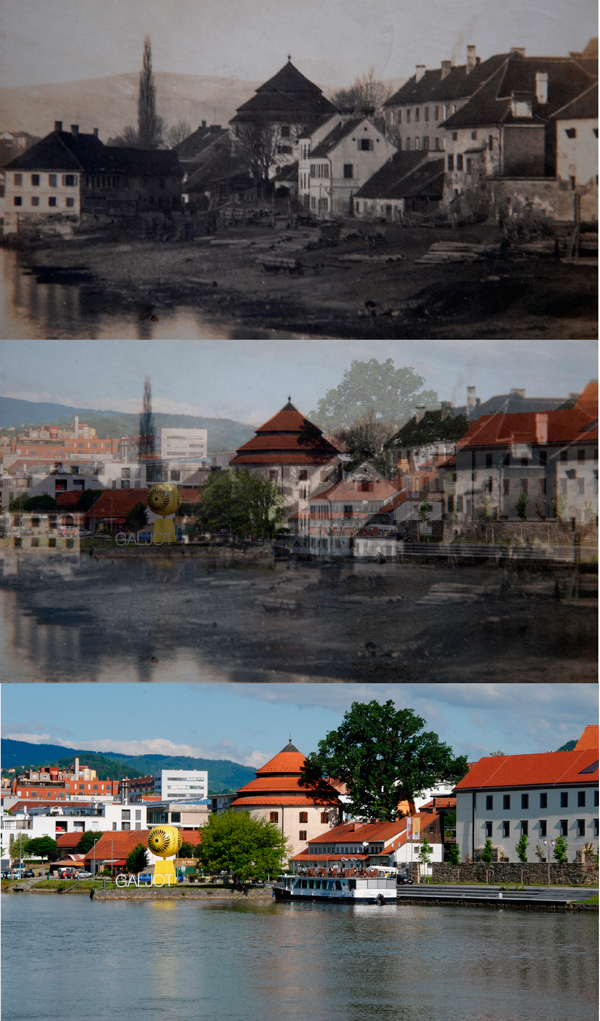 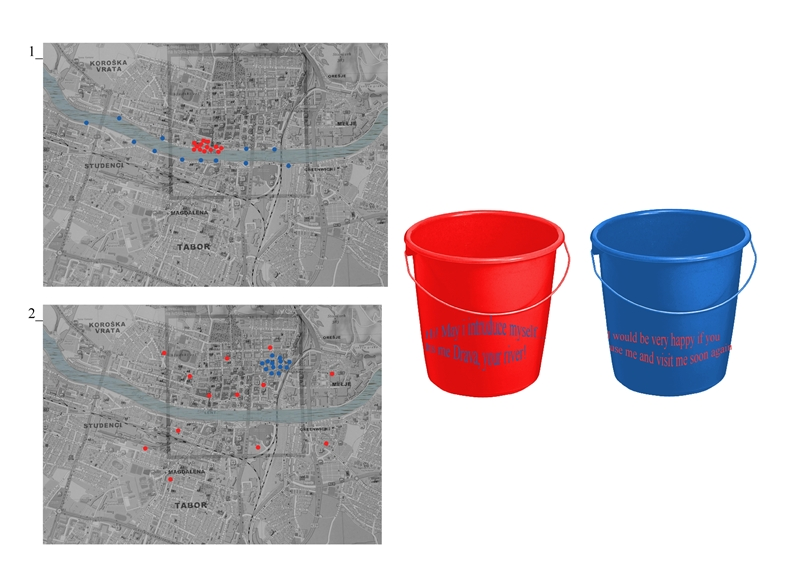 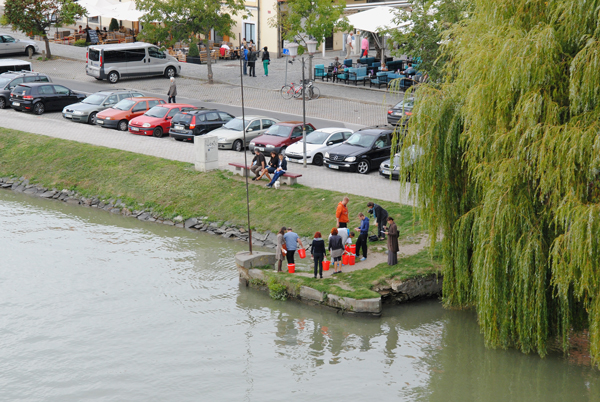 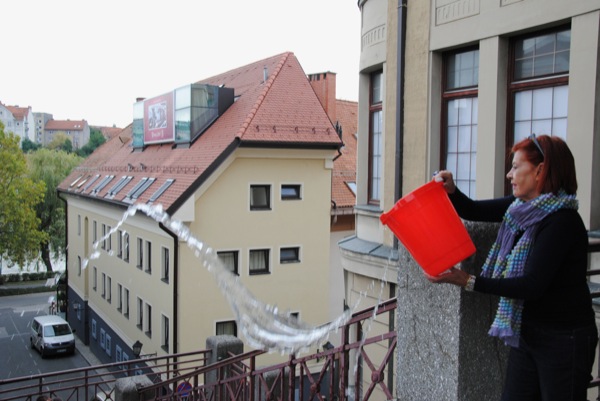 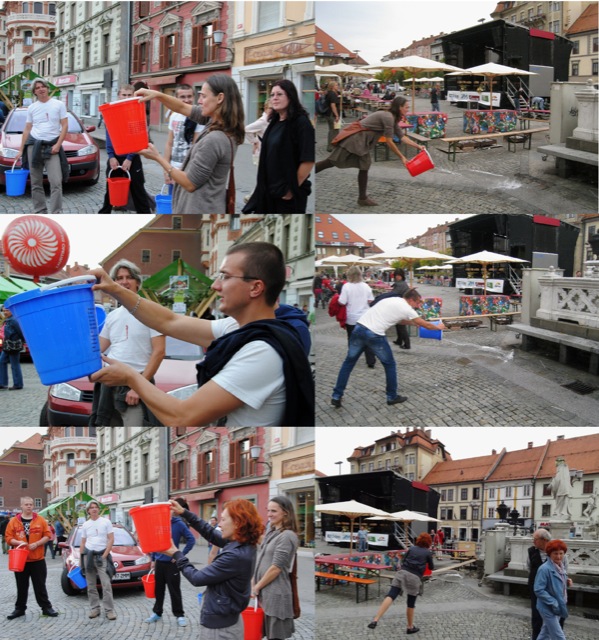 Rivers are a great potential in urban structures; they make a fundamental difference to the landscape of a town and can be used in many different ways.
The performative and interactive work Expanding Drava can be seen as an invitation to the inhabitants of Maribor to get in contact with their river Drava in the line of participating in the performance.

The intention of the performance is to get more aware about the own river and its potential by getting directly involved with Drava and treating the river as a temporary companion (or even playmate), like having a chat with the neighbor.
Drava can be defined as the neighbor of all inhabitants of Maribor.

Carrying and spreading “the river” into the city turns Drava into a moving temporary sculpture all over the city for one moment and behaves as the creating link between all the participants of the performance. These moments intend to raise awareness of the presence and importance of Drava in Maribor and in general of the great potential rivers offer in urban structures.

Looking at the history of the progress of cities, rivers and urbanism have always been in a tight relationship, which might be even more visible in current urban – development strategies of modern cities.

People used to settle close to rivers; many towns and nearly all big, important and natural growing cities are placed along rivers.
In the past, rivers were mostly used for transport and later, especially in these fast growing cities at the beginning of the 20th century, they played a very important role in sanitary prevention.

In the twenties, when the bourgeoisie discovered swimming as an appropriate amusement, people started to use the river for this and related activities.
In present days rivers are used in many different ways, from hydro-power-stations to romantic boat candle-light dinners on the river, from hobby- fishing to ice-skating in wintertime. And swimming of course.

Especially eating and drinking next to rivers in urban structures (and the seaside of course) became very popular and common (in Vienna e.g.) and works as an important advantage for restaurants or bars.
But young people in particular take their drinks rather by themselves and meet at the riverside to spend the night together (e.g.: Linz, at the Donaulände).
One of the reasons for spending time next to the river (water) might be because of people feeling linked to nature and memories of holiday-activities.

What about Drava in Maribor? What do people of Maribor think about this issue?
In the line of an interview-series asking inhabitants of Maribor 4 questions about their river, there was following question asked:
4_Do you have any ideas and requests/wishes how to use and be in touch with Drava?
(e.g.: having a beach next to the river, having the possibility to rent a boat, more cafes, plants, events/concerts etc. next to the river, playgrounds, an island to use in the river…..)
Please write down your proposals!

As far as the questions have already been answered, many of the proposals for interventions at the riverside implies to have some more bars/restaurants and proper possibilities to spend time directly next to Drava.

In this regard, lets go and meet Drava as often as possible and have a drink with her, it is a great gift to have a river in the town: Na zdravje!