Pictures of the exhibition: 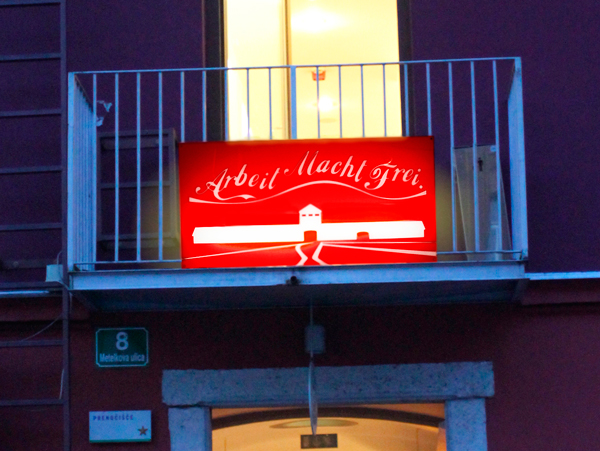 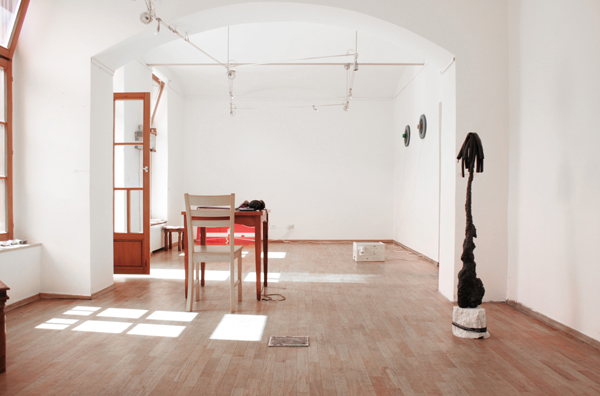 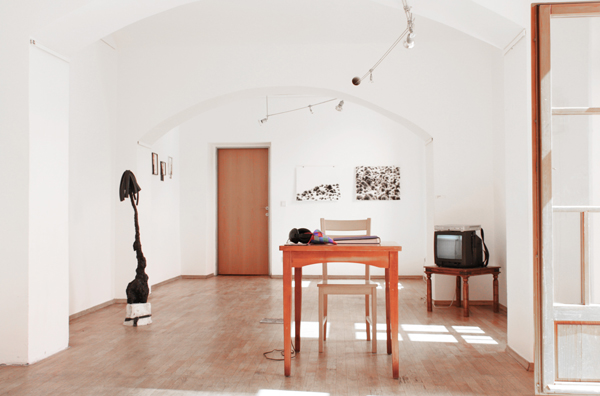 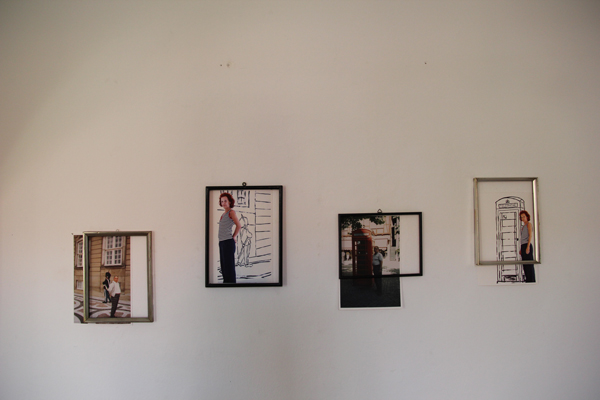 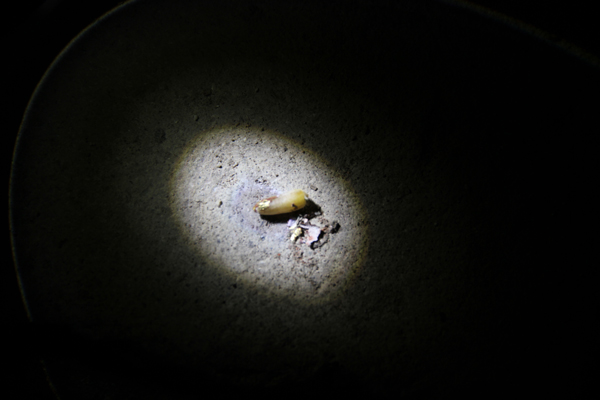 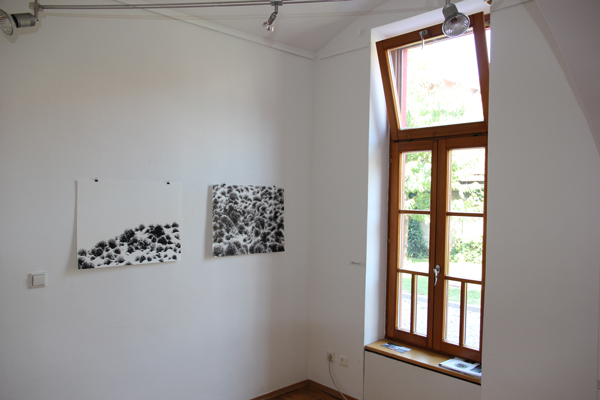 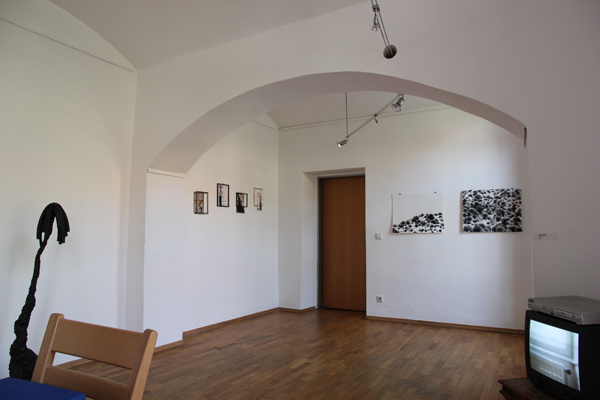 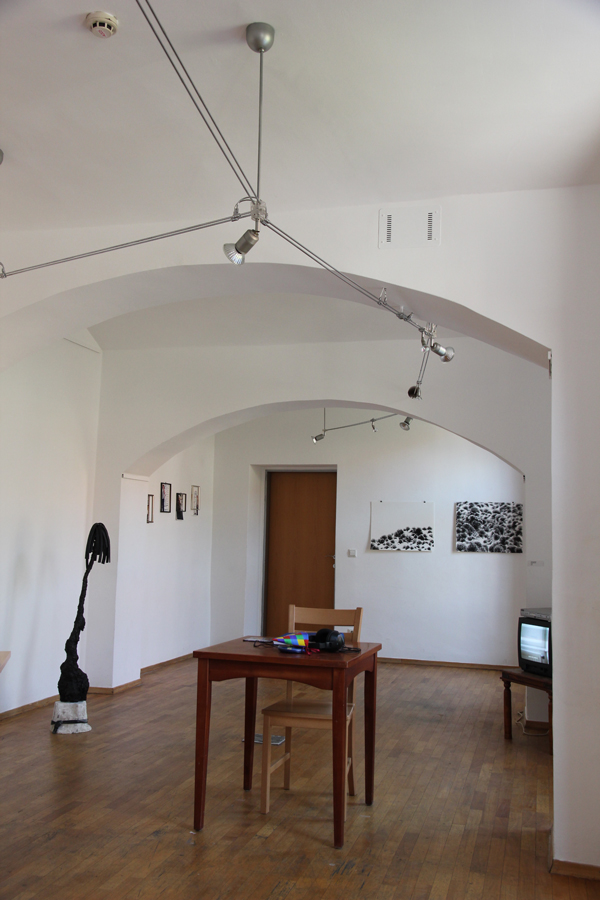 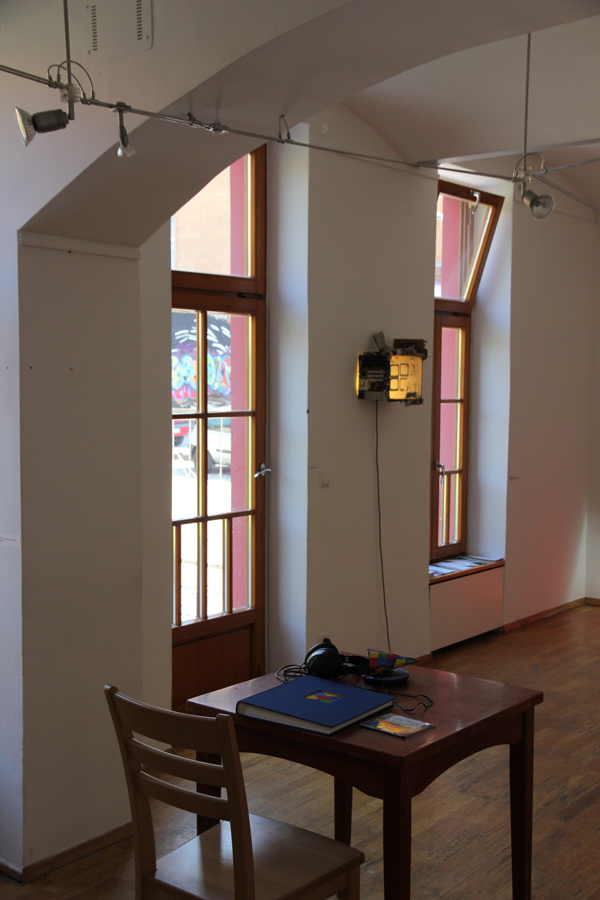 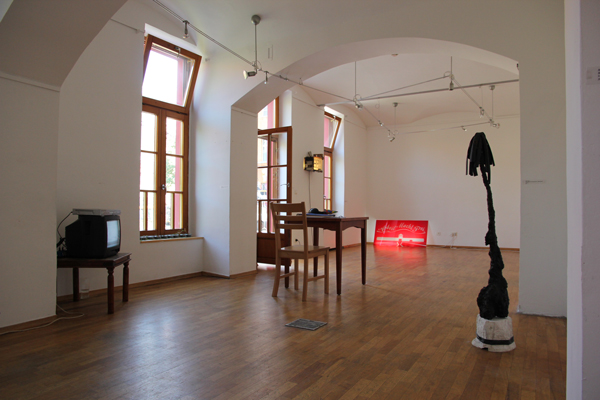 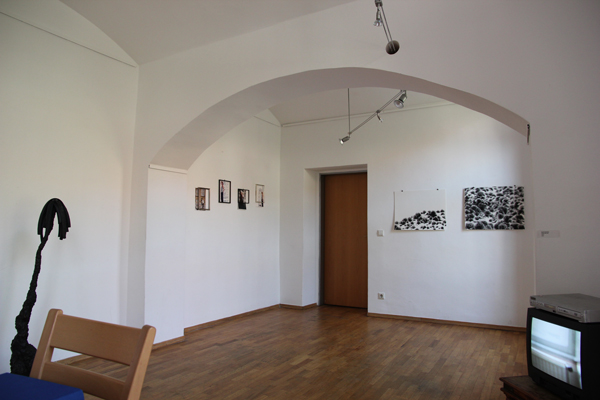 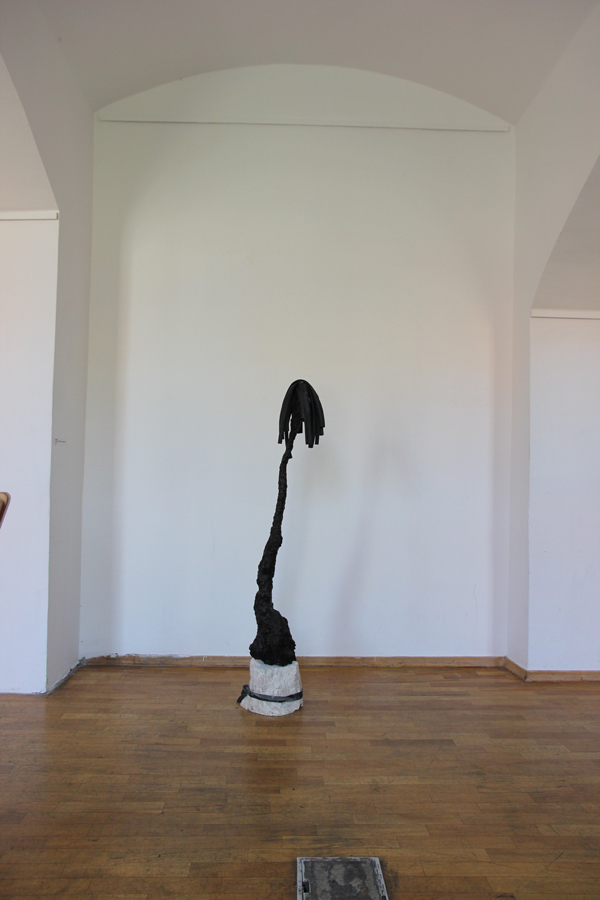 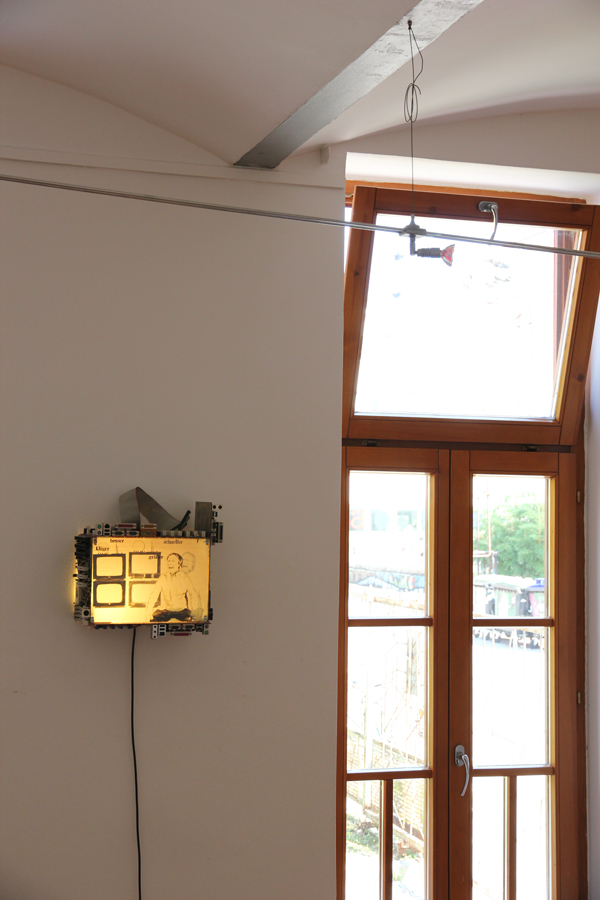 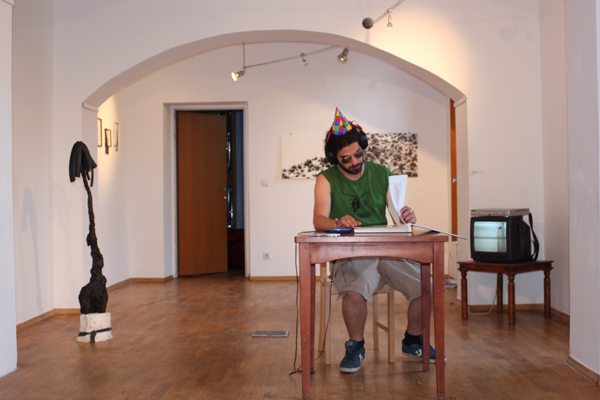 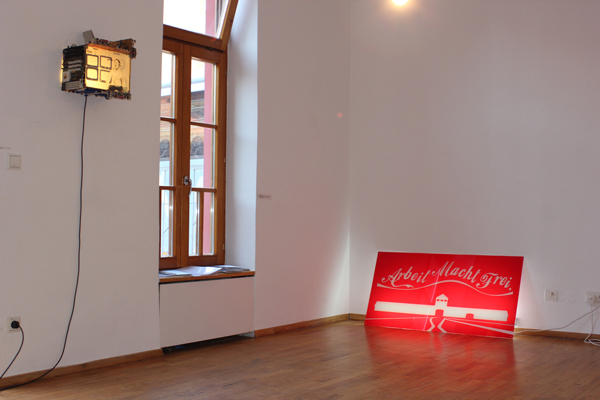 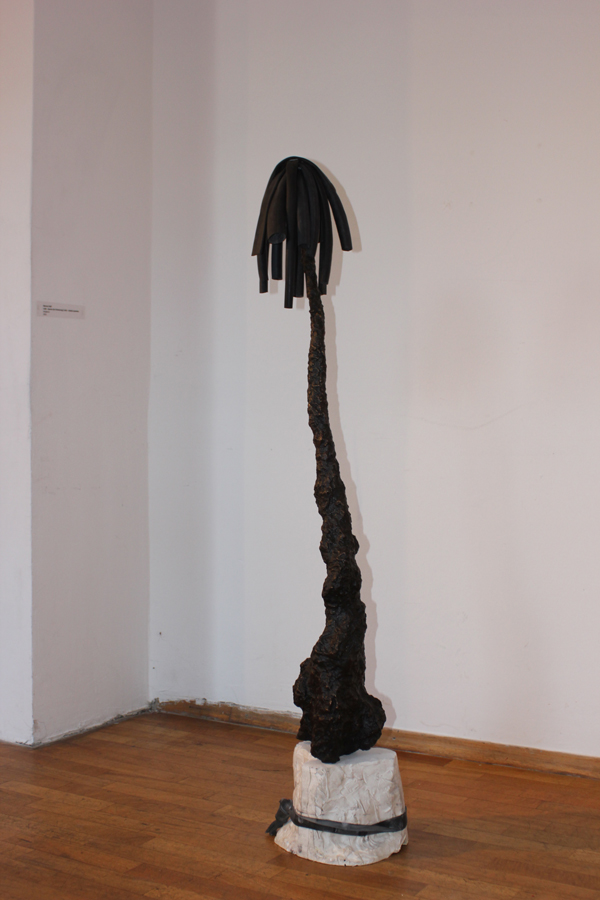 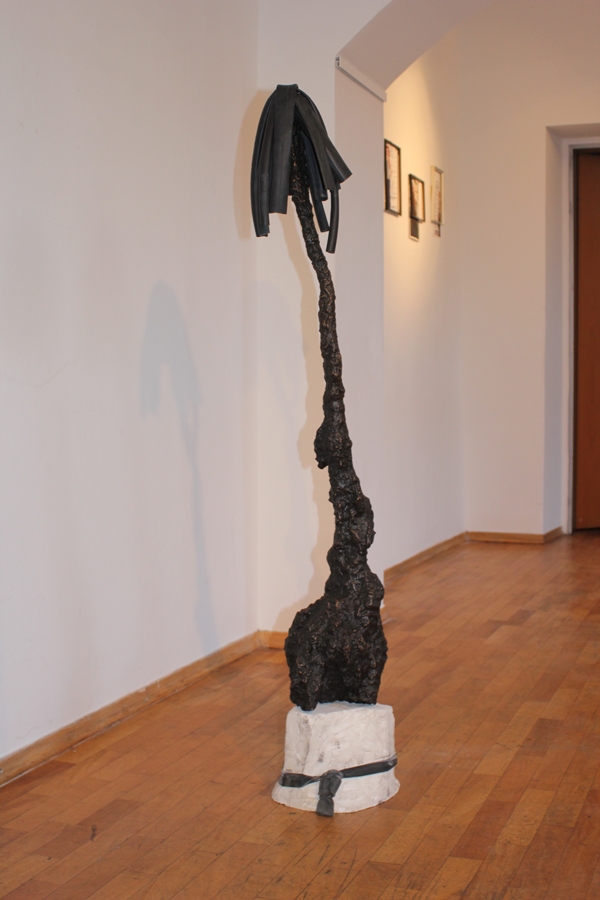 While one single gold-plated (Kamut-) grain illuminates in the darkness of the cellar and its specific history, there will be – as a live-performance – planted many of the same kind of seeds (but not gold-plated) outside in the light, acting as some activity which is related to daily and present life.
The way of applying the same material in different and contrary ways and spaces, expresses not only its manifold potential but brings these two different spaces and intervention into a relation to each other.
Because of the specific quality of the spaces (which was not known before) where the installation and performance was done, it was even possible to connect both works visually with each other.
In the wall of the cellar next to the garden above was a little hole working as a camera obscura, which directed the projection of it on the opposite wall above, where underneath was the little entrance into the very dark and deep part of the cellar. So while the audience could see the golden grain glowing in the deep level of the cellar in the distance, they could watch at the same time the projection of the performance on the wall above.

The single gold-plated grain can be understood as a compact, abstract, ideal and even holy image of life but frozen in the moment (“the flash of presence”).
But the act and result of planting a seed into the soil stimulates and shows its potential of life. Growth and change bring us to the image of the whole cycle of becoming and passing. So the grain embodies the beginning and the end at the same time. Past and future meet in one single grain and this moment of contact induces “the flash of presence”.
The growth of the seeds shows the potential of their radical change of form, which produces different qualities of
space and time.
One little single “grain-cell” with very small and compact space (“cell-ar”) becomes a “growing (moving) sculpture”, a symbol of change.
It is a sign of hope which turns the past into something better in the future.
AW

“Already in its original form as a simple seed it represents the past as a symbol of the plant that produced it, the
present with its presence as it is and the future with holding the possibility for growing into a new plant.
In this sense the seed becomes the representation of the idea of life itself and the dependence of mankind on powers of nature and its cycles.”
Vasja Nagy

Gallery setting
We have an opening tonight in a former prison with cells, who are renewed by artists  today, but haven´t lost scary vibes of the past.
We are in a former prison, a place where i.e. political prisoners have been tortured, shot or from where they where transported in concentration camps.

I don´t know if there are more positive or negative meanings, but the word “Cell” shows up very clearly that every thing has two pages.

The artists of the gallery of contemporary artists Vienna, Schleifmühlgasse 12-14, tried to point out various views at this word.

Because of the locations I choose the word “Cell” as an topic for our exhibition here in Ljubliana, Metelkova, Celica.

It was a very strange feeling for me when I stayed here last year.
It was an experience, but I can´t say, if it was  a pleasure too.
But people on the other side of the world, in south africa for example, likes to be inside of barbwires, walls and fences, cause this gives them a feeling of security.
My connection to gated areas are similar to sleeping in a former prison cell and my first way of thinking is being trapped, not secure.
But this is only my point of view.

The word cell comes from the Latin cellula, meaning „a small room“.
The descriptive term for the smallest living biological structure was coined by Robert Hooke in a book he published in 1665 when he compared the cork cells he saw through his microscope to the small rooms monks lived in.
There is a broad range about the meaning of the word Cell.
On one side the word cell is about growing, renewing, birth, actually a positive connotation, the other meaning is on the opposite, to be locked, taking away the human freedom, captured.

Cell is the basic of natural crowing. Cell means life, but it also can mean death, when cells are more crowing than usual.
Cell  means small groups of one ideal, in politic, religious or social meanings.
You can talk about the early christian cells, the islamic cells, terror cells like RAF or NSU, feministic cells and gender cells.
It belongs to the point of view of the spectator, if sHe will connotates it positive or negative.
A Cell is also a monks or nuns cell as  a prison cell.  Monks and nuns go there for retreat and contemplation, in prison cells are people who work against their government as well as criminals.

Lise Lendais for example choose the private cell family, Astrid Sodomka created a video made of many photographs and used them as cells, Benoit Gob took out pieces of landscapes and built new views with repetetativ using them.
Anna Watzinger pointed out the “Ur-cell”, a golden corn of kammut.
Michael Koch worked with braincells and synapsen in his object.

For the current show, Marcus Zobl makes sculptures out of papier-mache, cellulose and transforms them into sculptures made of bronze. The fragile sculptures welded iron formations were the brittleness of objects through the medium of pulp/cellulose is underlined or into the absurd exaggerated by a bronze.
Tiberius Stanciu shows up a political point of view and related it to the building in which we are guests today.
He related it to the new forms of slavery and inhumanity and the wellknown brand of a company, who is known as a öko and social criminal company without any liability or sustainability.

With this show we will present various points of thinking as well as different genres of Fine arts.
Denise Parizek, Curator